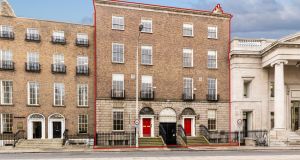 Agent Savills Ireland is guiding a price of €18 million for what can rightfully be described as a rare development opportunity on St Stephen’s Green in Dublin city centre.

Numbers 92 and 93 St Stephen’s Green are bounded to the south by the Iveagh Gardens, to the north by St Stephen’s Green, and to the east and west by a range of blue-chip office occupiers including aircraft leasing specialist Aercap Holdings, US pharma giant Horizon Therapuetics, and the new headquarters of the aforementioned Kennedy Wilson at number 94.

While the subject property is occupied currently under the terms of a series of licence agreements, producing an annual rental income of around €344,000, there is an opportunity to increase this further once the two buildings are fully let.

The property’s full potential however is outlined in a feasibility study prepared by RKD Architects for the 0.3 acre site. According to it, there is scope to develop a new, modern office extension of 4,676sq m (50,328sq ft) over six floors on the 0.2 acres to the rear of the existing structure. The proposal, as outlined, would incorporate a distinctive entrance to the new building via the brick alleyway bisecting numbers 92 and 93.

The development potential of the site is framed by the Dublin City Development Plan 2016-2022. The property is located in an area zoned Objective Z8, the aim of which is “to protect the existing architectural and civic design character, and to allow only for limited expansion consistent with the conservation objective”.