Property investors weigh the longer-term impact of the Covid lockdown 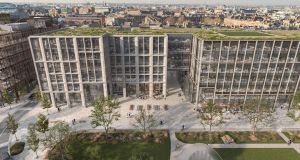 With strong occupier demand, and continued low interest rates, it was anticipated that 2020 would see prime yields in Dublin move closer to German and French rates, with potential for a 25-50 basis point shift in the prime office, private rented and industrial sector. The spread of Covid-19 across Europe, and the shock of the first lockdown in March, effectively paused the market, with prime yields holding at 2019 levels, while values for secondary properties fell as investors took account of the increased letting risks.

Given the extent of the disruption, investment volumes and pricing held up reasonably well. Although substantially down on last year’s record total of €7.1 billion, we expect turnover for 2020 to exceed €3 billion, a reasonable result given the headwinds.

The restriction on international travel has been the main impediment to transactions. Despite the advances in technology, including full walk-through and drone videos, most buyers still feel the need for a physical inspection before committing to a purchase. Thus, although more than €2 billion in new sales were launched by vendors including Colony Capital, Henderson Park and the Eircom Pension Fund, the sales completed during the year were largely limited to those that were launched prior to the first lockdown.

As in most markets, the immediate impact of the pandemic has been a flight to quality and to sectors less exposed to the impact of the virus. Assets in demand have included distribution, private rented sector and prime offices.

The most active bidding has been on high-quality logistics, with the recent sale of a pan-European portfolio by Mountpark setting a new benchmark yield of 4.5 per cent for two distribution units in Baldonnell Business Park. With logistic sales in mainland Europe now achieving below 4 per cent, there appears to be potential for further in Irish values.

In the office sector, investors have focused on grade A stock, let under long leases to institutional-grade covenants. Transactions of note include Amundi’s first acquisition in Ireland. The French fund recently signed for ESB’s Fitzwilliam 28, a newly developed block of 13,000sq m let to Slack. In another large-scale transaction, German investor Deka Immobilien purchased the Bank of Ireland headquarters at Baggot Plaza from Kennedy Wilson. Both deals were completed at yields of close to 4 per cent.

The closure of shops under the first and second lockdown has further undermined demand for retail. Few investors have been willing to increase their exposure to retail, and yields, already under pressure, are likely to push out further as investors look to exit the sector in 2021. The exception to this has been essential retail including supermarkets and well-located retail parks. French fund Corum have been active in both these sectors, acquiring Musgrave Retail Park in Waterford and an Aldi supermarket in Cork for €4.9 million (7.5 per cent) and €5.6 million (5.6 per cent) respectively.

Having absorbed the shock lockdown, investors have turned their attention to assessing the likely long-term impact of the pandemic. The question for investors is what changes to occupier and consumer behaviour are likely to remain after a vaccine is widely available.

The growth in working from home has the most impact on the market, with cities remaining largely empty while the suburbs have thrived. Although working from home is likely to be a greater feature of employment into the future, particularly for process-driven jobs, the majority of employees who require co-operation/collegiate working and face-to-face contact are likely to return to the office in a post-vaccine world.

Dublin’s exposure to the international IT and pharma sector has cushioned the economy from the worse impacts of the pandemic and will support the property market as we come out of the crisis. These sectors have been among the few to benefit from global turmoil, with increased reliance on new medical developments as well as electronic commerce and communication. These industries have continued to increase headcount, supporting the private rented sector, and as restrictions are lifted, increasing the demand for office space.

With a wide vaccination campaign in 2021, expectations are for a strong bounce-back in activity in the second half of the year.