Portfolio of 122 apartments in Tallaght for sale at €29.8m 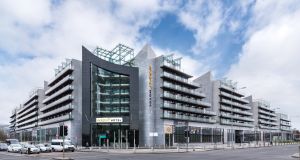 A portfolio of 122 apartments in Tallaght which is generating a rent roll of €2.08 million should tempt the considerable weight of money looking for exposure to Dublin’s private rented sector (PRS) market.

Agent CBRE is quoting €29.8 million for the Acorn Collection which was acquired in 2016 and 2017 by Irish investment firms SeaPoint Capital and Chartered Assets.

The sale includes 63 apartments at the Arena Centre acquired in late 2017 from Green Reit for about €9.25 million.

At the time Green Reit secured a 130 per cent return on the original acquisition cost of the apartments in late 2013. However, the apartments were on the market for nearly two years before a sale was finalised – Green’s valuation clearly benefitting from the strengthening rental market in the meantime.

Completed in 2008, the Arena Centre has a mixture of retail and offices as well as 230 apartments and a 119-bed hotel. The 63 Arena Centre apartments in this sale include 20 one-beds, 35 two-beds and eight three-beds. Each comes with a car parking space.

The other element in this sale is 59 apartments – 20 one-beds, 34 two-beds and five three-beds – at the 2005-built Abberley Square scheme on the Belgard Road.

These last came on the market in early 2016 at about €6 million on the instructions of receiver Tom Kavanagh of Deloitte. Back then the fully-fitted apartments (which do not come with car parking) were typically renting from €975 a month for one-beds and €1,300 for three-beds. These days, however, one-beds in the area are making about €1,500 a month, two-beds €1,850 a month and three-beds €2,100.

Abberley Square, like the Arena Centre, is within walking distance of the Square shopping centre and the Luas Red Line. The M50 is a short drive away, and there are a lot of big public and private sector employers in the area,

Six of the apartments are being used as show units for this sale. Otherwise, the homes are fully let. Given the sale price and rent roll of €2.08 million, an investor would secure a gross initial yield of 7 per cent.

“The average rental level across the collection is currently €1,425 per month which is below average rents for this location,” says Shane Cahir of CBRE. “Most of the apartments have been refurbished between lettings so this is a quality portfolio which has benefitted from a professional management structure.”

Residential property was the second largest asset class last year with €1.1 billion invested across 37 deals, with three out of the top 10 transactions being PRS investments.

PRS deals were 6 per cent of the overall Dublin residential market in 2016, 17 per cent in 2017, and 31 per cent in 2018. Estate agents estimate that there is between €5 billion and €7 billion of capital looking for exposure to the Irish PRS market at the moment.