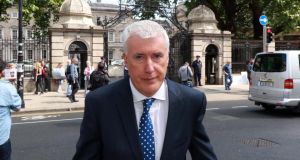 Outgoing head of group communications at Bank of Ireland Pat Farrell is to lead a new property industry lobby after leaving his current job.

Mr Farrell, formerly chief executive of the Irish Banking Federation (IBF), is due to leave Bank of Ireland this month.

It is understood that he will become chief executive of a new body, Irish Institutional Property (IIP), which is due to launch formally in coming weeks.

Its members will also include large pension-fund-backed or publicly quoted international players such as US-based Hines and Kennedy Wilson and London-headquartered Hammerson.

These organisations and their mainly overseas, long-term investors, are looking for steady returns from the Irish market rather than the boom-bust pattern that the property industry here has followed in the past.

The companies involved are said to be keen to maintain an open line of communication with Government on housing and property policies.

They are building many of the homes, offices and factories now under construction in the Republic.

Mr Farrell has broad experience of politics, before working for the IBF and Bank of Ireland, he was secretary general of Fianna Fáil, the Republic’s biggest political party. He began his career with the health service.

He has been due to leave Bank of Ireland for some time. It is understood that Mr Farrell became interested in the IIP job several months ago when he read of the industry’s intention to establish the body in a newspaper.

1 In six months we will be in the grip of a 1980s-style recession
2 Don’t expect a bonanza for Ireland from the EU’s €750bn recovery cash
3 Perrigo tells court of ‘very high level of unfairness’ in €1.64bn Irish tax bill
4 What will it take to reopen the world to travel?
5 Angela Merkel sweeps in to save the euro zone
6 Ryanair to process all Covid-19 refunds within 10 weeks, Michael O’Leary says
7 Property price drop of up to 12% this year a ‘reasonable’ assumption – McDonagh
8 Cork-based AI supply chain company Keelvar raises $18m
9 Aer Lingus wants quarantine period axed to resume flights in July
10 Chartered Land moves closer to approval for Dublin’s tallest tower
Real news has value SUBSCRIBE