Land between suburbs of Malahide and Swords for sale at €5.25m

Land bank of 75 acres has extensive views over Malahide Estuary 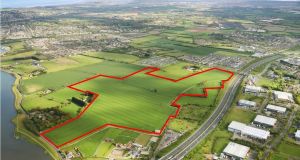 The land has two zonings under the Fingal Development Plan: a greenbelt covering 44.60 acres and high amenity covering 30.90 acres

A superbly located land bank beside Malahide village in north Co Dublin with extensive views over the Malahide Estuary is expected to generate considerable interest when it goes on the market this week.

Estate agents Savills is guiding €5.25 million for the 75 acres which also have frontage on to the Swords Road, Estuary Road and the M1 motorway.

The estate is held as agricultural land by the present owner, who acquired it in the 1970s from the late Patrick Gallagher, who was a well known property developer at the time.

Although currently zoned as a “greenbelt”, Savills says there may be potential for rezoning it for housing, leisure, commercial or institutional uses.

The agency also says the lands offer a unique opportunity for local stakeholders, including Fingal County Council and local sports and golf clubs.

Significantly, the land is less than 10 minutes’ drive to Dublin Airport, and between the suburbs of Malahide and Swords. It is also close to the M1, and the roundabout junction of the Swords Road and Mountgorry Way at the Swords Pavilions shopping centre.