Shelbourne Plaza faces bidding war while the Casino is withdrawn 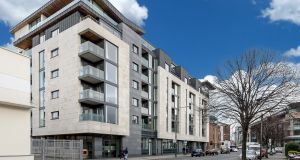 Shelbourne Plaza in the Silicon Docks, Dublin. The selling price could end up close to €22m or €23m after strong bidding from international parties.

Two well-located Dublin apartment developments recently offered for sale have met with different responses from the investment market following the introduction of the new four per cent cap on rent increases.

A 10-year-old development of 52 apartments known as Shelbourne Plaza in the Silicon Docks area of the south inner city has attracted particularly strong offers from eight bidders – most of them institutions – largely because the homes are vacant and will not be subject to the new rent restriction.

The entire portfolio has in the past been leased en bloc to a management company supplying short-term serviced accommodation. The new buyer will now have the option of continuing with this leasing arrangement – though probably at slightly higher room rates – in order to remain outside the rental embargo.

The second development of 105 individually let apartments at the Casino in Malahide village has been withdrawn unsold due in large part to the limited scope for rent increases as a result of the new tax guidelines.

Agent Knight Frank had been guiding €18.5 million for the Shelbourne Plaza apartments on Ringsend Road but after unusually strong bidding, the selling price could end up close to €22 or €23 million.

Selling agents Hooke & McDonald had been quoting more than €40 million for the 105 apartments available in the Casino, an impressive development overlooking the coastline on the edge of Malahide village.

Developer Gannon Homes originally sold 10 of the apartments when they were completed in 2005. The company’s new strategy will be to sell on the units on a phased basis as they become available.

All the homes have balconies or terraces and many of the penthouses have uninterrupted sea views.

The €40 million valuation equates to about €381,000 per apartment but they are now expected to make considerably more because of the high quality of the development and the shortage of accommodation in the village.

While the passing rent roll is in the region of €1.9 million per annum, recent lettings have shown a market rental value of at least €2.37 million.

Investors planning to acquire some of the Casino apartments can expect to get a rent of at least €1,900 per month for two-bed layouts and more than €2,250 for two-bed penthouses.

The latest round of bidding for the Shelbourne Plaza in particular underlines the continuing interest by international funds in Dublin’s apartment market and the urgent need for further developments to facilitate overseas workers relocating to Ireland.

The high level of interest in blocks of apartments is all the more surprising because up to the time of the property crash only a handful of these schemes were owned by either Irish or overseas institutions.