Partnership denied it ever gave DCM a five-year lease 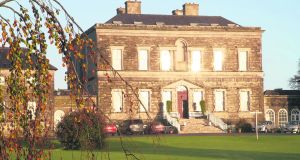 Bellinter House, Navan, Co Meath: as part of the settlement agreement DCM will give up vacant possession of the hotel by January 8th, 2016.

A dispute over the running of Bellinter House Hotel in Navan, Co Meath has been settled.

DCM claimed it was given a five-year lease to run the boutique hotel. It sought a declaration from the court that it has a valid five-year lease and an order for specific performance of parts of the contract.

The partnership denied it ever gave DCM a five-year lease, claiming the firm had no written signed lease, and the only agreement was a month-to-month lease.

Yesterday, Mr Justice Paul Gilligan was told the matter had been resolved.

Gary McCarthy SC, with Ross Gorman SC, for the owners, said as part of the settlement agreement, DCM would give up vacant possession of the hotel by January 8th, 2016.

From that date, any new owner of the hotel would assume responsibility for all bookings made by DCM and the employment of all staff at the hotel, counsel said.

If no new owner had come on board, the partnership would assume responsibility for the bookings and employees.