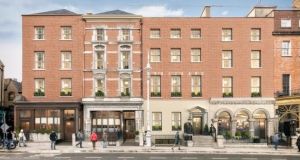 A computer-generated image of the proposed extended Dawson Hotel and refurbished RIAC in Dublin.

Plans for a €35 million extension of the Dawson Hotel in central Dublin and refurbishment of the Royal Irish Automobile Club (RIAC) private members club next door have received a setback.

Dublin City Council has raised a number of concerns about the project, including in relation to car parking spaces and the impact of construction works on the Luas Green Line, as well as conservation issues connected with protected structures at the site.

The redevelopment of the properties at 33 to 36 Dawson Street is being led by Irish investment group Tetrarch via a company called Miro Hotel 2 Ltd, which operates the 36-bedroom Dawson Hotel.

The planning application was submitted in August with a decision due on September 27th. On October 1st, Dublin City Council wrote to Damien Gaffney, a director of Miro and head of Tetrarch’s hospitality division, to request further information.

While broadly welcoming the restoration and development along Anne’s Lane, which the council said would “enhance the animation” of the area, Miro has been asked by it to address more than 20 concerns about the project.

The local authority has questioned the “quantum” of car parking spaces for RIAC members, which will remain unchanged at 61, citing concerns that they are being used for “commuter car parking”. A study was carried out between June and July of this year, showing that on average about 50 vehicles used the car park at any one time between 10am and 6pm each day.

Concerns have also been raised about the impact of construction works on the Luas line, which is situated directly outside the hotel. The council has told Miro that it is “not acceptable” that “drop-off or collection” would occur at the site that might disrupt the operation of the Luas.

The council is also seeking the removal of a lift in 33 Dawson Street due to the “loss of historic fabric” in the building, and requested an alternative design to deal with the 19th-century coach house on the RIAC site.

No comment was available from Tetrarch, which was hoping to begin development work at the site in the middle of next year.

Company filings show that Offaly-based businessman Stephen Grant, of Grant Engineering, is a major investor in the hotel, which made a loss of €1.1 million on turnover of €8.1 million in the 18 months to the end of December 2017.