After a lifetime auctioning furniture, Buckley brothers selling up 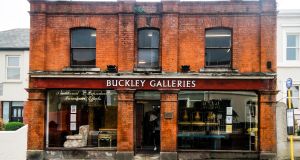 Auctioneer brothers Michael and Sean Buckley are hanging up their gavels after a lifetime of selling all kinds of furniture and bric-a-brac from their premises at 27/28 Sandycove Road in Co Dublin.

“My dad started this business in 1947 and we moved to our current premises in 1961,” says Sean Buckley, who retired three years ago from the business he joined in 1970, but still fills in for holidays.

“I’m too old to drag all the furniture and bits and pieces about the place. It’s such a physically demanding job preparing one auction a week, 49 weeks of the year,” he says.

Buckley Galleries, or Buckley’s as it’s known locally, is a local landmark whose Thursday auctions at 2.30pm attract a regular and devoted following. Household items, furniture and frames are its bread and butter but Buckley remembers auctioning a few kilos of coffee from Seán Kinsella’s high-end Mirabeau restaurant in Sandycove as one of the more “exotic” items he’s sold.

“Period furniture is getting very hard to sell,’ he says. “The present generation is not buying furniture from the previous generation, they prefer to go to Ikea and assemble it themselves. Plus, there’s very little formal dining going on in people’s homes these days so there are very few buyers for the beautiful furniture suites of yesteryear.

“One of the hardest things about my job is telling people how much their much-loved antique furniture is actually worth. They get a shock at how low it is. I am the Simon Cowell of second-hand furniture valuation but, as I always tell Peter Caviston [of nearby Caviston’s Food Emporium], it’s better than filleting fish!,”

Another factor chipping away at the business is the popularity of selling second-hand items on websites such as donedeal.ie. “But we often get asked to sell items than don’t sell on donedeal. And you can be pretty sure we’ll sell them, as we wouldn’t accept the undertaking if we didn’t think we could sell them. About 85 per cent of items sell at our auction, with the remainder shortly after. If an item doesn’t sell in three auctions, it’s returned to the vendor.”

Sean Buckley says he doesn’t want to think about how much he’ll miss the auctioneering business, the constant interaction with people and the great variety to the work. But it is clear that when the business closes, it’ll be an emotional wrench for the Buckley brothers.

The plan is to keep the business going to the second or third week in December when, hopefully, a sale can be arranged for the premises. “But we will trade until it sells,” he says firmly.

It is zoned Objective A under the Dún Laoghaire Rathdown Development Plan 2016-2022 to “protect and/or improve residential amenity”. Some of the uses open for consideration include childcare service, doctor/dentist, education, guesthouse, health centre/healthcare facility, hotel/motel, offices of less than 200sq m (2,153sq ft), restaurant, shop, and tea rooms/cafe.

Buckley says the future use of the building is open to the “imagination” but its location, a five-minute walk from the famed Forty Foot bathing spot in one of Dublin’s most sought-after suburbs, will surely attract the attention of potential buyers.

The building is for sale through Tom O’Higgins Estate agent at more than €700,000.