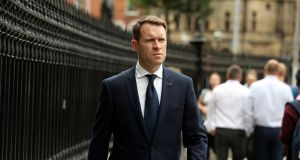 Marlet Property Group has won its High Court case against a company linked to developer Johnny Ronan over an alleged “ransom strip” that Marlet claimed is holding up an estimated €100 million Dublin docklands development.

Chambury, whose directors include Mr Ronan’s daughter, Jodie Ronan, had appealed a previous Circuit Court finding that Marlet’s Balark could buy out Chambury’s freehold interest on the 30-foot wide strip of land for €60,000.

Marlet and Balark, which assembled the 1.7 acre site on the south bank of the river Liffey for a huge scheme of offices and apartments, also asked the High Court to separately rule if it was entitled to demolish buildings on the strip.

In a judgment delivered on Tuesday by Mr Justice Robert Haughton, the court said Balark/Marlet could buy out the strip, and reduced the fee to Chambury to €45,000. Mr Ronan had valued the strip at €20 million.

The High Court also agreed that Balark could knock the buildings.

The site on Sir John Rogerson’s Quay, a prime spot in the city’s special development zone, was assembled by forerunner to Marlet, New Generation Homes, founded by CEO Pat Crean and Greg Kavanagh. Mr Kavanagh has since left the business.

Marlet later obtained permission from Dublin City Council for a huge scheme in one of the most sought after commercial and residential areas of the city.

However, Mr Ronan acquired the freehold interest on three slices, or “lots”, of the site in 2015, which were later transferred to Chambury.

The High Court case centred around two of the three Chambury lots, numbers 3 and 5, which were considered essential for the overall development. Lots 3 and 5 are covered by 250 year leases from the 1800s.

A dispute arose between Chambury and Marlet/Balark, which wanted to buy out the strips for a small sum under ground rents laws. The company linked to Mr Ronan sought a higher sum. The row has trundled on for two years.

The judge accepted evidence from Balark that purported to show it had the right under ground rent rules to buy out lots 3 and 5, and, separately, that there was nothing in the lease that would prevent it going ahead with works anyway.

The judge also criticised the evidence of Mr Kavanagh, who had originally helped assemble the site. He was called as a witness in the case by the company linked to Mr Ronan.

The judge said Mr Kavanagh was “generally unreliable” as a witness and said his testimony was “conflicted” because of confidentiality agreements he had signed upon his exit from New Generation Homes.

A source close to Chambury insisted it would look for an avenue to appeal the judgment. That source also highlighted that the company linked to Mr Ronan still controls the freehold of lot 7, which was not part of the case.

A source close to Marlet said lot 7 is “immaterial” to the overall development, and said the scheme would “continue and be completed on schedule”.