Architect showcases refurbishment of its offices on Merrion Square 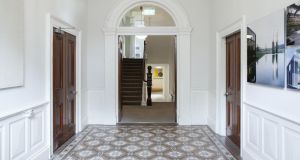 Leading architect Scott Tallon Walker has launched a stand-alone interior design service, showcasing the refurbishment of its own offices on Dublin’s Merrion Square as “an exemplary renovation of two Georgian buildings”.

At a lavish reception in the long-established firm’s headquarters, STW chairman Eoin Ó Móráin said the need to upgrade IT and wiring in the two adjoining 18th-century buildings led them to embark on refurbishing them to the latest standards.

“We tasked our interior designers to deliver what you will agree is a very beautiful work environment for us in STW,” he told a large gathering of construction and property professionals.

The firm’s large art collection was also rehung in its headquarters.

Ó Móráin also announced its “enhanced interior design service”, headed by two new associate directors: Deirdre Whelan, well-known for her role as a judge on the RTÉ television series Home of the Year; and Raffaella Roncoroni, who joined STW from Milan in 2008.

Noting that last Thursday was International Women’s Day and with gender equality “such an issue in the profession”, Ó Móráin said it was appropriate that the two appointees had boosted the ratio of female associate directors to 35 per cent.

Roncoroni, who is among the fourth generation of a Milan family involved in design and furniture manufacturing, said it was “in my blood”, and she had started her architectural career in two premier Italian practices, working on projects for fashion brands Armani and Zegna.

“Life then brought me to Ireland,” she said. “So from designing shop in Rodeo Drive I came to work on one of the most exciting projects in the office at the time – the Aviva Stadium – and from then on never looked back.”

Whelan spoke about Home of the Year, noting that it involved her and fellow judges Hugh Wallace and Patrick Bradley visiting 21 shortlisted Irish houses and giving each of them a score out of 10, with the overall winner announced at the end of the series.

Married to Paul Kelly, one of the principals in FKL Architects, she said: “In some ways what we are doing here feels a bit like the shoe is going to be on the other foot, and that you will be judging our interiors. In that case we’ll be looking for a perfect 10.”

Personally, I’d give it 8 out of 10. The revelation and restoration of a Victorian hall floor in 20 Merrion Square, the installation of a Portland stone floor in the main reception area next door in No 19, and the careful concealment of modern services were all handled well.

However, elaborate rococo and neoclassical plasterwork in the two houses has been left with layers of paint obscuring its sharp freshness. Perhaps the next refurbishment will include the painstaking work of carefully raking back these features to their original condition.

Coincidentally, the Royal Institute of the Architects of Ireland is also planning a major refurbishment of its headquarters at 8 Merrion Square, facing many of the same issues, no doubt with an eye on what’s been done just down the street by STW.