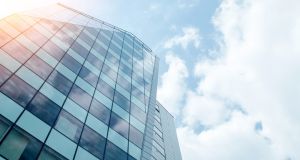 The State is the world’s sixth-biggest jurisdiction for non-bank financial activities. Photograph: iStock

Central Bank governor Gabriel Makhlouf said on Wednesday he has ordered staff to carry out a “deep dive” review of funds invested in the Irish commercial property market. The move marks a fresh focus on non-banking financing activities in the State, home to one of the world’s largest so-called shadow banking industries.

“The property sector is an area we have decided to study initially. I wouldn’t go so far as to say we already have identified problems, but it’s an area we know a little bit about,” Mr Makhlouf told reporters on Wednesday, adding that this is a natural place to start as he seeks to review “the whole of the market-based finance sector”.

The Central Bank estimates that Irish-resident investment funds hold about 35 per cent of assets in the State’s commercial real estate market.

“While greater involvement of non-bank financial entities in the sector facilitates liquidity and risk-sharing, it opens up the market to a new transmission channel for risk,” the Central Bank said in its latest financial stability review, published on Wednesday.

“A decline in risk appetite could result in a sharp fall in the availability of funding, dampening Irish property prices, reducing collateral values, depressing construction activity, and reducing the value of Irish households’ investments via pension or investment funds.”

Ireland is the world’s sixth-biggest jurisdiction for non-bank financial activities, with the size of the sector, centred in Dublin’s International Financial Services Centre (IFSC) having more than doubled in the past decade to more than €4.4 trillion.

While the industry in Ireland is mostly made up of heavily-regulated, Irish-domiciled investment funds and money market funds, it also contains special purpose vehicles (SPVs) and collateralised loan obligations (CLOs) that are subject to little or no regulation.

International bodies, led by the Financial Stability Board, set up in 2010 to monitor the global financial system in the wake of the 2008 crash, have been taking a closer look at non-bank financing – an area widely known as shadow banking – in recent years. The FSB estimates that assets in this field grew by 7 per cent to $184 trillion (€167 trillion) in 2017.

“I want to avoid just getting on the back foot if something happens and it has an impact on financial stability as a whole,” Mr Makhlouf said.

“If the analysis indicates to us risks that need managing, then we’ll be asking for the government for the powers to manage that. We’re not going to wait for the rest of the world to catch up with us,” he said, adding, however, that the Central Bank is keen to work with colleagues in Europe and globally in assessing and mitigating risks in the non-bank financing industry.