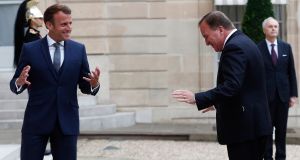 French president Emmanuel Macron greets Swedish prime minister Stefan Lofven as he arrives for a meeting at the Élysée Palace in Paris on Thursday. Photograph: EPA

French president Emmanuel Macron, the most ardent defender of a European coronavirus recovery fund, is lobbying heads of state and government intensively in the run-up to the two-day summit in Brussels that begins on Friday.

The summit will be the first to be held in person since the end of February, when European leaders failed to reach agreement on the 2021-2027 budget or multiannual financial framework (MFF). It is dedicated solely to the recovery fund and the budget.

An adviser to President Macron said agreement is possible this weekend, despite a statement by Dutch prime minister Mark Rutte to the contrary.

The Netherlands is perceived as the leader of the “Frugal Four” who are slowing progress towards a recovery fund. The others are Austria, Denmark and Sweden.

Mr Macron invited Swedish prime minister Stefan Lofven to the Élysée Palace on Thursday and is scheduled to speak to the prime ministers of the other three.

“The Netherlands insist most on strict control [of the recovery fund],” said an adviser to Mr Macron. “Even the other frugals are more flexible.”

In a surprise development on May 18th, Mr Macron persuaded German chancellor Angela Merkel to accept for the first time the principle of pooled European debt.

The Franco-German proposal for a €750 billion recovery fund, of which €500 billion is in grants and €250 billion in loans, was endorsed by the European Commission on May 27th and by European Council president Charles Michel on July 11th.

However, disagreement persists regarding the amount of the plan and the balance between direct grants to sectors or regions most affected by the Covid-19 pandemic and loans that must be repaid.

Each country will draw up a national plan for the funds. France hopes to receive €40 billion, or 40 per cent of its €100 billion national recovery plan, from Europe.

“Can one state veto another state’s plan?” Mr Macron’s adviser asked rhetorically. “Will there have to be a vote or a check every time recovery funds are paid from Europe to a member state? By whom? According to what rules?”

France objects to Dutch demands that recovery funds be linked to structural reforms. It also rejects the idea of a veto system and says procedures must not take “months and months with back-and-forth between the commission and member states”.

A veto system would allow EU members “to take each other hostage”, the adviser said. The EU must “balance solidarity and responsibility”.

The duration of the recovery plan, the date from which payments will be made, exact priorities and environmental conditions attached to grants and loans also remain to be determined.

France wants at least 30 per cent of recovery funds to go towards climate-friendly projects, and insists that no recovery funds can be used for undertakings detrimental to the environment, such as the production of fossil fuels.

The adviser expressed satisfaction that “two historic policies of solidarity”, the Common Agricultural Policy and the EU Cohesion Fund, will be preserved in the 2021-2027 budget.

Five net contributors to the EU budget, Germany and the Frugal Four, receive annual rebates totalling €6 billion. France wants the rebates to be abolished, but has grudgingly accepted they will continue for the time being, apparently as an incentive to the Frugals.

The amount of the rebates and their “progressive extinction” will be discussed at the summit, said Mr Macron’s adviser.

France also hopes to see progress on new, non-national sources of revenue for the EU budget. “Brexit makes it possible to reopen this debate, since we are trying to compensate partially for the departure of the UK,” said the presidential adviser.

France advocates three new, non-national sources for EU funds: an EU-wide tax on digital companies; amplification of the emissions trading scheme, which is in essence the purchase of “pollution rights”; and an EU carbon tax on imports from countries that are environmentally irresponsible.

1 ‘No demand... because there are no people’ at well-known Dublin pub
2 Revised help-to-buy scheme opens for applications
3 Divorce: What will it cost and can you afford it?
4 Apple received $250bn dividend from Irish subsidiary in 2019
5 Transferring the family farm without a tax headache
6 Post-Covid television starts to shape up – but with missing pieces
7 Nearly 30,000 could lose pandemic payment if they do not confirm eligibility
8 HSE says fix for Covid Tracker app rolled out to all Android users
9 Cairn Homes revenues down but average price of starter homes nudged up
10 ComReg criticised for ignoring request to update pricing models
Real news has value SUBSCRIBE