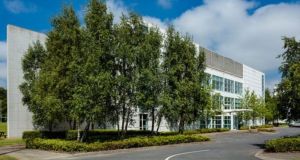 Yew Grove signed a deal to let its Birch House property to a “large multinational”.

The group appears to have seen a limited impacted from the Covid-19 crisis, with 98 per cent of its contracted rent for the third quarter to be paid in the current quarter.

Yew Grove agreed terms with Aldi to lease Birch House in Millennium Business Park in Co Kildare. The lease for 15 years is at a rate of €16.50 per sq ft. The property comprises 40,333sq ft of space. The deal means the company will collect rent in excess of €665,000 per year.

Aldi said it will move its buying and marketing teams, of which there are about 120, to the office facility which will be ready to occupy from early next year. Aldi said it chose the facility due to its proximity to its warehousing and distribution centre in Naas.

“Overall, this is a very solid update from Yew which has outperformed our expectations for the period,” said Goodbody analyst Colm Lauder.

“We see this letting as a strong vote of confidence for the location and for the continued level demand for high quality regional office space, that a large multinational is willing to close a transaction of this size at a rental level that is in line with pre-Covid expectations,” he added in relation to the Millennium Business Park deal.

The company said it also agreed to lease a 750sq ft retail unit in Tullamore, Co Offaly, for an annual rent of €25,000, and a property in Mallow, Co Cork. It also agreed to surrender a lease in Stillorgan for which the former lessor, Italian biotech Diasorin, paid a “sum equal to all rent due” to the beginning of February next year as well as €300,000.

At the end of June, Lisney confirmed a valuation on Yew Grove’s portfolio of just over €141 million.

“Despite the strains imposed on businesses by the crisis, the strength of our tenant covenant continues to be reflected in the robust performance of our rent roll and the stability of our portfolio valuation,” said Jonathan Laredo, chief executive of Yew Grove.