Office space take-up falls to levels not seen since 2013 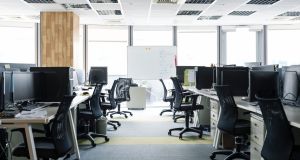 Between April and May, just 14,650sq m of office space was occupied, significantly lower than the long-run quarter average of 46,185sq m.

Take-up of office space in Dublin has fallen to a level not seen since 2013, the year the State exited the bailout programme following the financial crash, according to data from commercial property agents Cushman & Wakefield.

In a early sign of nervousness in the commercial property market, just under 60,000sq m of office space has been newly occupied so far this year. An average year would see about 92,000sq m of space occupied by this point.

Between April and May, just 14,650sq m of space was occupied, significantly lower than the long-run quarter average of 46,185sq m. The second quarter figures show that take up fell to under a third of what it ordinarily would be under normal circumstances.

A more optimistic picture could be seen where new signings were concerned. The volume of space signed in the quarter was in line with the opening quarter of this year at 85,800 with an additional 264,850sq m of space signed under construction.

While the Covid-19 pandemic has “effectively paused” Dublin’s office market activity, a recovery is being seen as lockdown measures lift, according to Ronan Corbett, head of office at Cushman & Wakefield Ireland.

“The remainder of 2020 will be tough, but there are reasons to be optimistic for 2021. Our Cushman & Wakefield live demand tracker is showing over 270,000sq m of unsatisfied active demand in the market as of early July.”

By the end of June, however, 363,550sq m of space was available, equating to a vacancy rate of 9.5 per cent overall, and 7.6 per cent in Dublin’s central business district.

While availability rose 10 per cent in the quarter, it also remains 10 per cent short on the same period last year. That had the effect of ensuring that prime rents remained unchanged in the quarter at €673 per sq m.

“However, as the second half of the year progresses, uncertainty in the market combined with the outlook for economic indicators sees the potential for modest downward pressure,” the estate agency said.