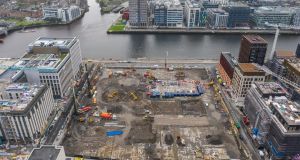 Developer Johnny Ronan must not be granted permission for a 45-storey tower in Dublin’s docklands, city council planners have warned An Bord Pleanála.

The council said the board “does not have the jurisdiction to grant permission” for the Waterfront South Central scheme on North Wall Quay, because it contravenes the city development plan and the planning scheme for the docklands.

Mr Ronan last October lost a long-running court battle with the council to secure permission for a 13-storey building further west on the north quays, known as the Salesforce tower, because it exceeded the plan’s maximum height rules for the docklands area.

His latest bid to build the city’s tallest building was last month submitted to An Bord Pleanála under the “fast-track” Strategic Housing Development (SHD) process, which bypasses the council’s planning system.

The development would include 1,008 apartments in three blocks – of 14, 41 and 45 storeys – which the Ronan Group said would be a “high-rise, mixed-use garden village in the heart of Dublin’s new riverfront district” with “distinctive hanging gardens, green walls and urban forest” that would be a “green lung that will breathe new life into the Dublin Docklands”.

In a letter to the board, the council said the “proposed heights very significantly exceed the maximum planning scheme heights of eight-storey commercial or 10-storey residential. This is a very significant concern.”

In its application to the board, the company maintains the heights are justifiable on the basis of national policy, following the ministerial guidelines issued in December 2018, which remove blanket numerical limitations on height.

The application also includes a legal opinion from Eamon Galligan SC, which maintains the board has the power to grant permission for a SHD that “materially contravenes the height provisions” of the council’s planning scheme for the area, “and, by extension, the development plan”.

However, the council said the board has no such jurisdiction to do so. The council has told the board there was nothing in the ministerial guidelines to suggest they were intended to override the planning scheme, rather they required the council to amend its planning scheme to reflect the new guidance on building height.

The council more than a year ago submitted its proposed amendments to the dockland’s planning scheme but the board has yet to issue its decision.

The application proposed a “significant departure from the development envisioned for the site, and would be an exponential increase in the height, scale and massing of development upon the site without delivering a proportionate improvement in the provision of public open spaces, public realm or active frontages and uses”, the council said.

The council outlined a number of other concerns with the application including a “significant concern with the environmental quality of the proposed open space” and that development was proposed on land “not in the ownership of the applicant”.

A decision on the application is due in May.