Housing schemes in Goatstown and Swords approved despite objections 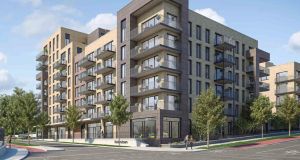 An image of the proposed apartments scheme at Fosterstown North in Swords, Co Dublin.

An Bord Pleanála has approved two large-scale residential schemes in Dublin, in spite of objections from the respective local authorities.

The bord has granted planning permission to Orchid Residential Ltd for a six-storey residential block to contain 239 student bed spaces on a site currently known as Vector Motors at Goatstown Road in south Dublin.

The board granted planning for the student complex after both Dún Laoghaire County Council and the board’s own inspector recommended refusal.

The inspector in the case expressed concerns over the integration of the project in the context of Goatstown Road, and that the proposal would not find the appropriate balance between increased density and existing residential densities.

Dún Laoghaire-Rathdown County Council recommended refusal after concluding that the proposal would constitute overdevelopment of the site and would be overintrusive for neighbouring properties.

However, the board gave the proposal the green light after concluding that the scheme on the infill site would provide an attractive transition from the character of the existing low-density suburban development to the existing higher developments to the north and east.

The board concluded that the development would not be visually dominant or overbearing in the context of its immediate environment.

In a separate decision, the board has granted planning permission to MKN Developments to construct four apartment blocks comprising 265 apartments, with one of the blocks rising eight storeys in height at Fosterstown North in Swords.

Fingal County Council has recommended that planning be refused, while 180 local residents had also objected to the scheme.

The council recommended that planning permission be refused across four headings and stated that the height, density and infrastructural provision of the scheme was contrary to the Fosterstown Masterplan.

However, the board gave the plan the green light after concluding that the scheme would constitute an acceptable quantum and density of development in the accessible urban location and would not seriously impact residential or visual amenities of the area.

The board stated that a material contravention of the Fingal Development Plan was justified as the proposal is strategic in nature and supports the need for urban infill residential development.

Since 2017 planning applications for housing developments of more than 100 units and 200-plus student bed spaces can now be made directly to An Bord Pleanála.

3 DCU rolls out e-scooter scheme on its campuses

9 GAA gets go-ahead for new hotel near Croke Park