The ESB is seeking to convert a museum in a restored Georgian house on Dublin’s Fitzwilliam Street into luxury apartments. The Georgian House Museum opened in 1991. Video: Bryan O'Brien (Interior clips: ESB/www.numbertwentynine.ie) 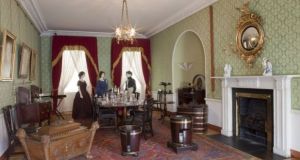 The diningroom in the Georgian House Museum. Photograph: ESB

The ESB’s plans to convert a museum in a restored Georgian house on Dublin’s Fitzwilliam Street into luxury apartments have been described as “sly” and “cultural vandalism” by Dublin city councillors.

The Georgian House Museum at 29 Fitzwilliam Street, opened in 1991 to celebrate Dublin’s status as European Capital of Culture, was operated by the ESB and the National Museum of Ireland as an exhibition of “Dublin home life from 1790 to 1820”.

The building was restored by the ESB in 1988 as part of a deal with Dublin Corporation, agreed a decade earlier, to allow the company to exceed standard plot ratios in its expansion of its 1960s-built office headquarters on the street.

In the mid-1960s 16 Georgian houses on Fitzwilliam Street had been demolished to make way for the company’s new headquarters, designed by Sam Stephenson and Arthur Gibney.

The museum was temporarily closed in 2017 to facilitate the demolition of the Stephenson/Gibney building and the construction of a new ESB headquarters. However, as the new building nears completion, the ESB has said it does not intend to reopen the museum and instead has applied to Dublin City Council to convert the building into three apartments, which it intends to sell individually.

City councillors representing the area have unanimously called for the ESB not to close the museum.

Labour councillor Mary Freehill said she was “absolutely appalled the ESB would suggest getting rid of the Georgian museum”.

Fianna Fáil councillor Deirdre Conroy said the creation of the museum had been a “basic compensation” for the destruction of 16 houses on the street.

Labour councillor Dermot Lacey described the ESB move as a “sly planning application lobbed in on December 18th” when it might have gone unnoticed. “Here we have one of the most successful, financially prosperous State companies engaging in the strokes of the worst type of developers. I am appalled by their behaviour.”

Getting rid of the museum would be “cultural vandalism”, Independent councillor Mannix Flynn said.

The application is also opposed by heritage groups including the Irish Georgian Society, Dublin Civic Trust, and An Taisce.

An Taisce said the ESB was “seeking to remove the only public realm benefit on their site, in the abandonment of the museum use which was established over 30 years ago [in] 1991”.

The civic trust said the museum was “a vital element in the interpretation of the Georgian city”.

The Irish Georgian Society said the move would be a “sad and significant loss” to the city and the public experience of its 18th-century heritage.

The ESB has said the apartments “will deliver the highest levels of residential accommodation to best modern standards”. The company said it had “no future plans for a museum”, and it was “never envisaged that exhibition would run forever”.

“Since 1991 there is a changed landscape in terms of historical/heritage offerings, with many museum/heritage alternatives now available. ESB’s commitment to heritage activities is now more closely linked to our corporate responsibilities – but not diminished,” it said in a statement.