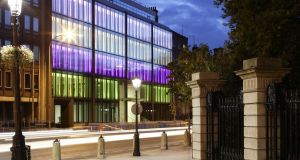 US property giant Starwood is on course to secure about €550 million from the sale of five prime Dublin office assets.

Starwood’s decision to dispose of the portfolio is understood to have been prompted by an unsolicited approach from Iput earlier this year, which placed an indicative value of about €555 million on the assets.

Having considered the approach, Starwood opted to offer the Watermarque building and the four other assets in the Cedar Portfolio to a select number of national and international investors through CBRE and Eastdil Secured, a subsidiary of Wells Fargo Bank.

Up to six parties, including Kennedy Wilson and Blackstone, are understood to have run the rule over the portfolio, which is guiding €535 million.

While the portfolio is more than 98 per cent occupied and delivers a combined annual income of €28.7 million, there is potential to increase the rent roll through the redevelopment and extension of 29-31 Adelaide Road.

Iveagh Court is the portfolio’s biggest asset by size and rent. Developed by Sean Reilly’s McGarrell Reilly, the Charlemont Street property extends to 220,938sq ft and is generating €10.44 million – or 36 per cent of the portfolio’s rent – from tenants which include WeWork, Mercer and the OPW. It is understood the building has been ascribed a value of about €200 million for the purposes of the sale.

The Watermarque building meanwhile accounts for €4.9 million, or 17.2 per cent, of the portfolio’s rental income from its tenants which include Pfizer. Also developed by McGarrell Reilly, the Dublin 4 property comprises 108,772sq ft of offices and has been valued at about €90 million.

At 60,254sq ft, the McGarrell Reilly-developed Marsh House at 25-28 Adelaide Road provides €2.93 million (10 per cent) of the portfolio’s rent. The property, let to Marsh Ireland, carries an individual value of about €50 million.

The combined €340 million valuation given to Iveagh Court, the Watermarque and Marsh House underscores the resurgence in Dublin office values over recent years .

In January 2014, the three properties were sold by Nama as part of Project Holly along with 25 other commercial property assets owned by McGarrell Reilly in Dublin 1, Dublin 2 and Dublin 4 for €220 million. Having acquired the portfolio at a 41 per cent discount to its €373 million par value, Lone Star sold the majority of the assets within it on to Starwood for €350 million in March 2015.

Outside of the McGarrell Reilly assets acquired as part of the Project Holly sale in 2014, the Cedar portfolio also includes 29-31 Adelaide Road. Lone Star acquired the building from Sean Reilly for €45 million in April 2014 after IBRC ordered its disposal. The property was included subsequently in Lone Star’s sale of Reilly’s assets to Starwood.

Extending to 59,006sq ft, the building is let to the OPW at a rent of €3 million and accounts for 11 per cent of the Cedar portfolio’s income.

Developed on the site of a former Department of Justice building, the property is producing €6.25 million (22 per cent) of the portfolio’s rental income.

Nos 1-2 Parkgate Street make up the final element of the sale. Occupied by Transport Infrastructure Ireland, the 49,822sq ft property delivers €1.08 million or 3.8 per cent of the portfolio’s rental income.