Irish hotel group Tifco to change hands for up to €600m 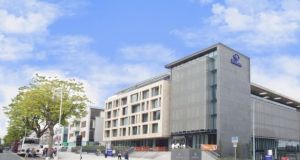 The Hilton Hotel in Kilmainham, Dublin, is owned by Tifco

US private equity firm Apollo Global Management has agreed to acquire Ireland’s second-largest hotel chain Tifco in a deal said to be worth up to €600 million.

Goldman Sachs-backed Tifco owns 18 hotels and sites for two new hotels in Dublin. Several of the properties operate under the Crowne Plaza and Travelodge brands.

Tifco also manages a number of other high-profile hotels around the State, including Clontarf Castle in Dublin, the Heritage Resort at Killenard, Co Laois, and the Metropole in Cork.

The value of the portfolio has not yet been disclosed but is understood to be €500 million-€600 million.

The Competition and Consumer Protection Commission has been notified of the transaction.

Documents submitted to the commission show Apollo has set up a designated company, Trident Bidco DAC, to take control of the Tifco group of companies, which have been amalgamated for the purpose of the deal. A spokesman for Tifco declined to comment.

Tifco is the State’s second-largest hotel operator behind the publicly listed Dalata Hotel Group and operates more than 1,800 bedrooms in Ireland. The hotels it manages for others involve just under 800 rooms.

Goldman Sachs took a controlling stake in Tifco in 2014 when it bought the company’s debt from IBRC. The company’s original founders – businessmen Aidan Crowe and DID Electrical founder Gerry Houlihan – retain minority holdings in the group.

The Tifco sale will include the 204-bedroom Crowne Plaza Hotel at Northwood, Santry, near Dublin Airport, as well as Crowne Plaza hotels in Blanchardstown and Dundalk.

Other hotels in the group include the 114-bedroom Holiday Inn Express at Northwood and the 120-bedroom Hilton Hotel at Kilmainham in Dublin.