The site at Oatlands College in Mount Merrion with planning permission for 64 residential units. 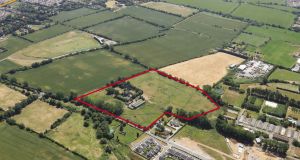 The lands at Kinsaley are in a mature and private setting.

Two ready-to-go housing sites in Mount Merrion and Kinsaley, Co Dublin, with overall planning permission for 163 homes, are expected to attract strong bidding when they are offered for sale from today.

The sites are being marketed separately for Pat Crean of Marlet Property Group. But John Swarbrigg of Savills, who is handling both sales, said he would not rule selling both assets in one lot. McPeake Auctioneers is joint agent on the Kinsaley site.

The good mix of unit types is expected to appeal to local developers who have witnessed an unprecedented demand for housing in recent years.

Mount Merrion is one of the most sought-after residential locations in south Dublin, being around 6km from the city centre and within walking distance of Stillorgan, Blackrock and Dundrum.

The joint selling agents are seeking offers over €15 million for the Kinsaley lands, which extend to 6.50 hectares (16.06 acres) in a mature and private setting close to Kinsaley House. The site has full planning permission for 100 housing units, predominantly three- and four-bedroom semi-detached houses, and good quality accommodation in the original Kinsaley House when it is refurbished.

Kinsaley is a charming residential village around 13km northeast of Dublin city centre. It is located along a Dublin bus route and is also served by Dart train stations at Malahide and Portmarnock.

Swarbrigg said the sales were likely to attract significant national and international interest because of the pent-up demand for housing in both Mount Merrion and the Kinsaley district.