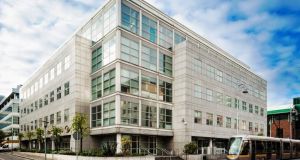 The banker Credit Suisse is in a key position to purchase New Century House, a substantial office investment in Dublin’s IFSC that is rented and occupied by the Bank of Ireland.

Credit Suisse is believed to be the top bidder, at about €66 million, for the Grade A building, which was bought just over four years ago by Hibernia Reit for €47million. The investment will show a net return of about 5 per cent after a rent review early next year.

The six-storey over-basement building at Mayor Street in the north docks dates from 1999 and has a net internal floor area of 7,432sq m (80,000sq ft) as well as basement parking for 87 cars. The lease runs until 2024. Next January’s rent review will take into account an upwards only clause.

A feasibility study by Shay Cleary Architects suggests that the block can be extended by a further 3,158sq m (31,000sq ft) of office space by infilling the atrium at each level, reconfiguring the existing cores, and developing an additional floor to bring the overall capacity up to 10,609sq m (114,200sq ft).

New Century House was developed by Quinlan Private with the benefit of tax breaks then available in the IFSC.

Credit Suisse has played a prominent role in Ireland’s property investment market in recent years, having bought a number of high-profile properties, including the Golden Island shopping centre in Athlone for €43 million; the former Bord na Móna headquarters on Baggot Street for €36 million; La Touche House, one of three office buildings at the front of the IFSC, for €35 million; and One Grand Parade overlooking the Grand Canal in Dublin 6 for €18.1 million.