July total is one off record set last December 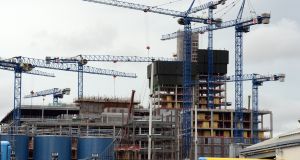 July’s total is 155 per cent more than the 31 recorded on February 1st, 2016, when the newspaper’s crane survey was launched. Photograph: Cyril Byrne

There were 79 cranes visible over the centre of Dublin on July 1st from the seventh floor on The Irish Times building on Tara Street.

This is a rise of seven (10 per cent) on June’s total and one off the 80 recorded on December 1st, 2017 – the highest score yet registered by the Irish Times Crane Count.

July’s total, however, is still 155 per cent more than the 31 recorded on February 1st, 2016, when the newspaper’s crane survey was launched.

There were 54 cranes recorded on the southside – a rise of four on June – while demolition work is now well advanced on Apollo House on Tara Street, part of what could be a significant area of redevelopment bordered by Poolbeg, Hawkins, Townsend and Tara streets.

Meanwhile, there were 25 cranes visible on the northside – a rise of three on the previous month. This reinforces an emerging trend as development is now accelerating in the north docks and suburbs.