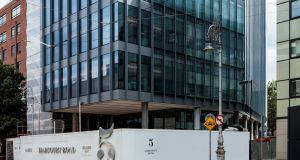 The Harcourt Road office building in Dublin is due for completion in July and comprises 50,000sq ft of lettable space over seven floors.

Commercial property firm Green Reit is to lease the entirety of 5 Harcourt Road, Dublin 2, to a subsidiary of WeWork Companies for an annual rent of €3 million.

WeWork is the world’s largest provider of collaborative workspaces, and has guaranteed the lease obligations. Last month it signed on to become the anchor tenant at One Central Plaza, the old Central Bank tower on Dublin’s Dame Street.

The newly developed Harcourt Road office building in Dublin city centre is due for completion in July and comprises 50,000sq ft of lettable space over seven floors. WeWork has signed a 20-year lease with no break options, at an annual rent of €3 million.

“We are delighted to lease the entire of 5 Harcourt Road to WeWork, continuing the successful de-risking of our development programme, adding a further €3 million to our annual rent and extending our income security with 20 years certainty,” he said.

“We look forward to welcoming WeWork to the building, as it broadens its existing presence in this vibrant part of Dublin city centre.”

The company also confirmed that it had completed the sale of Westend Retail Park for €147.7 million, the contract for which was exchanged on May 25th.

In a note to investors, an analyst with Investec said the rent of €60 per square foot was 9.1 per cent ahead of the €55 previously guided by the company.

“Furthermore, we understand that the rent is due to step up to €65 per square foot at the end of year five, with standard upward/downward rent reviews taking place at five-year intervals thereafter.

“There will be no rent-free period, but Green Reit will fit out the building to an exceptionally high standard in lieu of this. The underlying construction cost of Harcourt Road is in line with previous guidance at €41 million.”

The analyst said the market would “doubtless cheer” the letting of 5 Harcourt Road at much stronger-than-guided terms.

An analyst with Davy said the letting “de-risks” Green Reit’s portfolio, and that the rent achieved was “strong” in the current market.

“WeWork is assembling a cluster of office buildings in the area with the adjacent Iveagh Court on Harcourt Road and Charlemont Exchange on nearby Charlemont Place, in addition to its premises on the south quays and at North Wall Quay,” he said.

“The rent achieved is strong in the current market – it is more than 10 per cent above forecast and 20 per cent above the initial underwrite – and this is pre the agreed uplift.”

The analyst said the deal should raise the share price of Green Reit by one or two cents, and maintain its “outperform” rating.