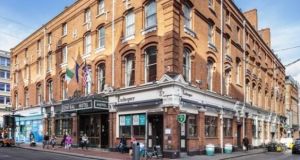 Transaction activity in the Republic’s hotel market totalled €221 million across 12 hotels in the nine months to the end of September this year, nearly three times the value of transactions for the same period last year, according to a report by estate agent Cushman & Wakefield.

The Central Hotel was purchased in a joint venture between Deutsche Finance International and BCP Capital for a figure close to €40 million while thefour-star Glasson Country House Hotel was acquired by developer Paddy McKillen jnr’s Oakmount vehicle for €9 million.

The continued interest in hotel assets may be in part due the continued growth in the Irish tourism industry, the report said, noting that, despite the uncertain political environment with Brexit, trips to Ireland had exceeded five million over the six months to the end of June, up 3.5 per cent on the same period last year.

“With a strong performance in the past three months, all indicators suggest that overall activity in 2019 will exceed that of the past two years,” Cushman & Wakefield’s Isobel Horan said.

“This is particularly evident in the luxury end of the market which is strengthening in terms of activity,” she said.

The east and midlands region has seen the highest share of activity, 56 per cent, driven largely by the sales of Powerscourt and Druids Glen in Co Wicklow earlier in the year.

It also noted that Irish buyers have dominated activity in the year to date, accounting for 67 per cent of transaction value. At the same juncture in 2018, they accounted for 22 per cent.

Cushman & Wakefield said Dublin continued to be the focus of construction activity, accounting for 87 per cent of development activity with new builds continuing to dominate.

New builds are evident in not only Dublin, but Cork and Galway also, where two hotels, both to be named The Dean, are under construction, it said.

It also noted that the new Hyatt Centric in the Liberties, Dublin 8 opened last week, while The Moxy Dublin City in Dublin 1 is due to open imminently.

“We are thrilled to announce the opening of Hyatt Centric The Liberties Dublin – representing a milestone for Hyatt in Europe,” Declan Curtis, general manager of Hyatt Centric, said.