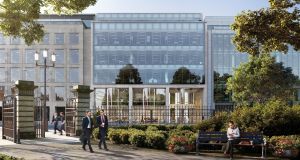 Irish Life has rejoined the property development market after an absence of more than 20 years. Ireland’s leading property investment company is in the early stages of replacing the dated Hainault House on St Stephen’s Green, Dublin 2, which it originally built in 1964.

Although by far the largest single investor in the Irish commercial property market, with a portfolio worth more than €3 billion, Irish Life has not been involved in any major construction projects since it completed a single phase of Georges Quay in 1995. In recent years it added a new frontage and additional floor space to the same building overlooking the Liffey. Two of the new floors are still vacant.

It will be no surprise that Irish Life has chosen 70 St Stephen’s Green to re-establish itself in property development. The site adjoins two high-quality buildings, Aercap House (formerly known as Canada House) and the Department of Justice.

To repeat the monetary reward of Hainault House, Irish Life has engaged WA Wejhert Architects to create an office building that is “respectful to its history, sensitive to its surroundings and representative of its own time”. The decision to repeat the three curved-glass elements with dividing Jura limestone stone piers will remind the construction industry of the original format that worked so well.

The planned six-storey block will have full-height triple glazing, a double-height entrance lobby and natural light penetration into the heart of the building. The open-plan floor plates will be further complemented by two new courtyards in the centre of the building, which will respond to courtyards in adjoining blocks. The plans also provide for extensive rooftop terraces overlooking both St Stephen’s Green and the Iveagh Gardens.

The completed building is expected to accommodate up to 500 workers. Around 20 car parking spaces will be accessed from Earlsfort Terrace and made available at a rent of €4,000 per year. There will also be parking facilities for around 80 bicycles.

Deirdre Hayes of Irish Life said 70 St Stephen’s Green would be one of the first office buildings in the country to have a near-zero energy rating. The new arrangements would ensure that there would be “an uplift of around 60 per cent in energy conservation”.

According to Mark Smyth of CBRE and Roland O’Connell of Savills, the planned building would be perfectly positioned in “the beating heart of Dublin’s business district – an area well established as one of the most prestigious in the city”.

RO'CK ‘I’ve never passed an exam in my life. I’m still driving on a provisional’