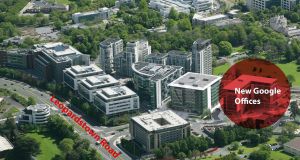 Google is to increase its already-massive footprint in the capital following an agreement to lease more than 7,000sq m (75,000sq ft) of office space at Central Park in Sandyford, Dublin 18.

The company’s move to secure accommodation at the newly-developed Block I gives it the capacity to increase its existing 8,000-strong Dublin-based workforce by up to 750 employees.

It is understood Google has agreed a rent of around €30 per sq ft on a lease of 10 years with a break option in the fifth year for six of the eight floors at the property.

Spokespersons for both Google and Central Park’s developer and current owner, Green Reit, declined to comment on the deal.

Ownership of Block I and the wider Central Park office complex will shortly pass to UK-headquartered property company, Henderson Park, as part of its overall acquisition for €1.34 billion of Green Reit.

Google’s decision to locate at Central Park will be seen as yet another fillip for the Sandyford Business District, as it seeks to compete with Dublin’s central business district and docklands for major occupiers.

The tech giant’s main operations here continue to be run from its European headquarters on Barrow Street and the nearby Montevetro building in the Dublin docklands however. Google’s employees are also based at the (8,965sq m/96,500sq ft) Grand Mill Quay building, the (4,738sq m/51,000sq ft) Velasco building on Grand Canal Street, and over several floors at businessman Denis O’Brien’s offices at One Grand Canal Quay. The company also has offices in Block L at Freeman House in Eastpoint Business Park.

Google’s biggest investment in the Dublin office market came last year, with a €300 million deal to acquire the entire Bolands Quay scheme. Upon completion, the development will comprise 36,851sq m (396,660sq ft) of office, residential, retail and cultural space, and be capable of accommodating up to 2,500 workers.

1 Can we finally say farewell to the scourge of hot-desking?
2 Big Four told to outline plans for audit split in UK by October
3 Why gift a son now if it eats into his tax-free inheritance threshold?
4 Irish pharma sector warns of protectionism as US corners supply
5 Mortgage arrears: Prevention is definitely better than cure
6 ‘Over-zealous’ lending practices will kill off housing supply, industry body warns
7 Chris Johns: Economic self-harm is the root of populism
8 Flights abroad ban could last all summer
9 Dealz to create 75 jobs with three new Irish stores
10 Government to avoid ‘cliff-edge’ on Covid-19 payment changes
Real news has value SUBSCRIBE