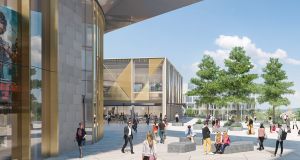 An artists impression of the facillity at Carrickmines.

Planning permission has been granted for a large new retail and residential development in south Dublin, despite strong opposition from the owners of the Dundrum Town Centre.

An Bord Pleanála has rejected an appeal by several parties including the Dundrum Retail Limited Partnership against the decision of Dún Laoghaire-Rathdown County Council to approve a €75 million project that will form part of the existing retail park and office development at The Park in Carrickmines.

The overall development will extend to almost 84,000sq m in four blocks extending in height from two to six storeys.

Commenting on the ruling, Iput said it was “a major step forward in realising our ambition to reinforce Carrickmines Park as the leading out-of-town retail destination in Dublin”.

The development was also opposed by the owners of the cinema multiplex in the Dundrum Town Centre as well as Olivia Buckley, a Fianna Fáil candidate for the Dundrum area in the recent local elections.

DRLP, which is a joint venture between UK property group Hammerson and German insurer Allianz, said it was not opposed to the new development in Carrickmines in principle.

However, it claimed the proposed level of retail floor space was excessive for a neighbourhood centre particularly given there was no significant immediate residential catchment population to justify its scale.

DRLP said the proposed cinema and leisure uses would undermine the viability of existing town and district centres in south Dublin and represented a material contravention of the council’s development plan as well as running contrary to a range of regional and national planning policies.

Ms Buckley opposed the development claiming there was no requirement for another large retail centre or massive cinema complex in south Dublin and expressed concern it would impact on other nearby centres including Dundrum, Stillorgan and Dún Laoghaire.

She claimed retail warehousing was already oversubscribed in the capital, while the extension of The Park would also create serious traffic congestion on the M50.

Ms Buckley said it was disingenuous to call what was proposed a neighbourhood centre and branded such a description as “seriously misleading and inaccurate”.

Movies@Dundrum claimed the proposed multi-screen cinema would impact on its business when it relied on the planning system to protect its investment.

However, Iput said there was a clear and long-standing need for a neighbourhood centre in Carrickmines as it was located in a significant growth area.

Dún Laoghaire-Rathdown County Council also said the development was an appropriate location for the centre as it would cater for new and emerging communities.

In its ruling, An Bord Pleanála said the centre would make a positive contribution to the urban character of the area.

The board said concerns relating to noise, vibration, dust and traffic could be satisfactorily mitigated by various measures and claimed the proposed development would have significant, direct, positive effects for the local population.

“Provision of neighbourhood centre facilities will reduce trips from the area to other locations,” it admitted.

Iput successfully appealed a number of planning conditions imposed by the local authority that sought to deliver the project on a phased basis, which the developer claimed were overly prescriptive.

However, Iput failed to overturn the condition which required it to construct a link road to Ballyogan Road before any other construction work began. Iput claimed it was “unreasonable and unnecessary” and could impact on funding and the viability of the project.

It secured some minor concessions in its challenge to the scale of development contributions imposed by the local authority, which totalled almost €13 million.