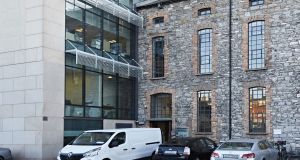 The Warehouse sits on the waterfront to the rear of South Bank House and comprises a three-storey warehouse.

US property group Kennedy Wilson completed the sale of the two properties, South Bank House and the Warehouse.

The Warehouse sits on the waterfront to the rear of South Bank House and comprises a 19th century, three-storey warehouse building with more than 1,811sq m (19,500sq ft) that was extensively refurbished to provide modern office space.

Both assets are leased to Mason Hayes and Curran, a Dublin law firm with offices in London, New York and San Francisco.

The two properties were acquired by Kennedy Wilson in July 2013 and sit adjacent to Boland’s Quay, a mixed-use development due for completion in the first quarter of 2020. It was also acquired by Google for about €300 million in May 2018.

It was one of the largest city centre urban renewal projects in years and includes 27,999sq m (301,389sq ft) of office space, 46 apartments, cafes and cultural spaces.

Kennedy Wilson Europe head of Ireland Alison Rohan said the “thriving redevelopment” of the Barrow Street area culminated in the successful sale of South Bank House and the Warehouse.

Google director of real estate and construction Joe Borrett said the company “continues to be committed to Ireland and our real estate presence and portfolio continues to grow to meet the needs of our business”.

Google Ireland paid €1.6 billion dividend last year as it announced a €5.9 billion rise in turnover to €32.2 billion on the back of a sharp rise in advertising revenue.

The latest accounts for the internet giant, which employs more than 3,400 people in the Republic, show its tax charge for the year rose to €170.9 million from €163.8 million last year.

That’s equivalent to 12.9 per cent of its pre-tax profit for the year, which was €1.33 billion, compared with €1.34 billion a year earlier. The decline was due in part to a rise in the cost of sales, which rose by €2.1 billion to €9 billion.

Administrative expenses also increased over the year, rising by €3.5 billion to €21.9 billion due to a number of factors including a 7 per cent increase in direct employees to 3,428 from 3,201 in 2016.

1 Who are Ireland’s 17 billionaires?
2 Are there annual limits on inheritances or gifts to a child?
3 My father in a nursing home wants to gift me his house
4 State subsidises public sector retirees to cover gap until State pension
5 Avolon executives share €27m in pay as revenues soar
6 Q&A: Why has the pension age question suddenly become an election issue?
7 Dublin office vacancy rate hits lowest level in 20 years
8 Profits rise at JPMorgan Chase and Citigroup but slump at Wells Fargo
9 Shell counting the cost as sale of Corrib gas field completed
10 Irish tech firm SoapBox chosen for $30m US child literacy project
Real news has value SUBSCRIBE