Former Ires chief David Ehrlich to retire from board 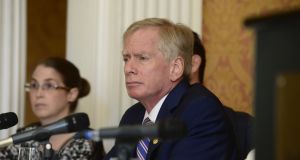 Former Ires chief David Ehrlich will retire from the board at the end of this year. Photograph: Cyril Byrne

Irish Residential Properties Reit’s (Ires) founding chief executive, David Ehrlich, who stepped down from the role last year to become a non-executive director of the Dublin-listed company, will retire from the board at the end of this year.

Ires said in a statement issued on Tuesday afternoon that the move comes as Mr Ehrlich prepares to retire as chief executive of Canadian property trust, Capreit, which set up the Irish company in 2014. Mr Ehrlich was succeeded as the CEO of Ireland’s largest private residential landlord last year by Margaret Sweeney.

“On behalf of the board, I would like to thank David for his professional and personal commitment and dedication to Ires during his tenure as chief executive officer and subsequently as non-executive director and wish him well in the future,” the Dublin-listed company’s chairman, Declan Moylan, said.