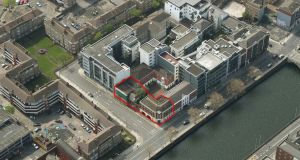 The sheer strength of demand for well-located residential development opportunities in Dublin city centre has helped to drive the sale of a site at Usher’s Quay for €3.25 million.

The price secured for the 0.05 hectare plot represents a premium of 15.4 per cent on the €2.75 million agent Knight Frank had been guiding when they brought the property to the market last May.

Located between numbers 29/30 Usher’s Quay and numbers 1, 1A and 2 Usher Street, the subject site came for sale with full planning permission from Dublin City Council for the demolition of all existing buildings and the construction of a new part six/seven storey building comprising 27 apartments (five one-bed units and 22 two-bed units), above ancillary residential amenities and a commercial unit at ground floor. There is no Part V Social & Affordable requirement as the site area is less than 0.1 hectares.

While the sale attracted bids from a number of residential developers, it is understood the purchaser is considering the submission of a revised planning application with a view to developing a hotel or aparthotel.

The site currently comprises a three-storey building at 29-30 Usher’s Quay with car parking at ground-floor level to the rear which is accessed by a gated archway, and a terrace of derelict buildings at numbers 1, 1A and 2 Usher Street.

The property is well served by public transport including numerous Dublin Bus routes and the Dublin Airport Express which operate along the quays, as well as the Luas red line stop at Smithfield which is 400 metres from the site. Heuston Station is less than 1km away.

Hotel takes case against insurer Zurich over failure to pay for Covid disruption 16:44
Law firm Ashurst opens Dublin office due to Brexit 16:22
Number of Boeing 737 Max jets back in service tops 100 16:12
Sharp rebound in US jobs figures as Covid cases declined 16:10
Volkswagen aims for electric cars to make up 70% of sales in Europe by 2030 15:58