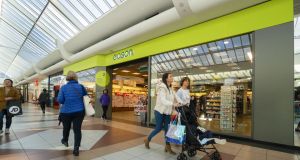 Eason’s store comprises a double unit of 1,125sq m (12,104sq ft) over two floors. It has the benefit of frontage on levels 1 and 2 at Blanchardstown Centre.

One of only a handful of independently-owned retail units at the highly successful Blanchardstown Centre has been brought to the market by agent Bannon at a guide price of €16 million.

The property, which is being offered as a sale-and-leaseback opportunity, will be the subject of a new 25-year lease to its current owner, the leading book and stationery retailer,Eason, at a market rent of €1.1 million per annum, reflecting an initial return of 6.25 per cent for the prospective purchaser.

The subject property comprises a large double unit extending to 1,125sq m (12,104sq ft) over two floors and is centrally located within the Blanchardstown Centre, enjoying frontage on to both level 1 and level 2 malls.

At level 1, the unit is located opposite the new flagship 12,500sq ft JD Sports which is under construction and due to open later in the year. At level 2 the unit is situated directly opposite the Hollister flagship store, which is due to open in the third quarter of this year. This is in addition to a number of other new developments within the scheme including a new Aldi at level 1 and nine new restaurants at level 2. Other high-profile occupiers in the retail scheme include Dunnes, Penneys, M&S, BT2 , Boots, H&M and Zara.

Blanchardstown Shopping Centre scheme is Ireland’s largest shopping and leisure destination and is majority owned by Multi/Blackstone, who acquired their interest from Green Property in 2016 for close to €950 million implying a yield level for mall units in the region of 4.75 per cent.

In terms of the subject property, Bannons say there is scope in the long term to increase the rental income by dividing its existing space at levels 1 and 2 into two or even four units. Were these new units to be let independently of each other, the selling agent believes the estimated rental value grow to as much as €1.28 million.

The lessee of the current combined unit will be Eason Limited. This entity is the lessee on all the major Eason’s units in Ireland including the four other M50 shopping centres being Dundrum Town Centre, Liffey Valley Shopping Centre, The Square Tallaght and The Pavilions Swords.

Eason Limited had a turnover of €109 million in the year ended January 2018, with a profit after tax and restructuring costs (€3.3m) of €700,000. The profit after tax for the year ending January 2019 is expected to be approximately €3 million bringing the balance sheet value to around €6 million. Full accounts for 2018 and 2019 are available on request.

Quite apart from securing an attractive initial yield of 6.25 per cent, the purchaser of Eason’s Blanchardstown unit will have the benefit of a 10-year parent company guarantee from Eason Operations Limited (EOL). This guarantee will be limited in terms of financial exposure to three years’ rent. Full draft accounts for EOL will be made available to prospective purchasers of the Blanchardstown unit on request.

Eason’s sale of the Blanchardstown unit forms part of a wider disposal of 13 of its properties which it announced in 2018. The company estimated at the time that the sale of this property portfolio could generate a windfall of about €60 million. Some €20 million of these proceeds are set to be transferred to Eason’s retail business with the remainder divided among its 220 shareholders.

The first and most significant transaction in the process saw Eason secure €19 million from the sale in January 2019 of its 17,176sq m (184,886sq ft) St Margaret’s warehouse on 8.4 acres in north Dublin to Irish property company Iput. Eason’s flagship store on O’Connell Street remains on the market on a sale-and leaseback basis at a guide price of €24.5 million.

Commenting on the sale of Eason’s Blanchardstown unit, Rod Nowlan, director at Bannon, says: “This is an opportunity for smaller institutional funds and private investment houses to gain access to an asset quality usually reserved for super funds.”