Erstwhile developer tells US court of inability to pay sanction of $9,330 imposed on him 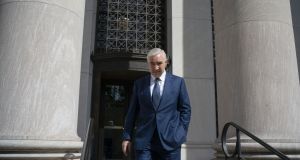 Sean Dunne leaves the US Federal Court House on May 22nd, 2019, after giving testimony in his civil financial fraud trial. Photograph: Douglas Healey

Sean Dunne, once one of Ireland’s richest men, told an American court last week that he earns just €200 a month and is therefore unable to pay a sanction of $9,330 (€8,500) imposed on him earlier this year.

“As I am now bankrupt, I have great difficulty in obtaining work,” said the one-time Irish property tycoon in a sworn affidavit dated October 3rd. “Currently, I have no significant current or future income available to me, except for my current income from Amrakbo, the company I am currently employed with.”

Mr Dunne, who says in the affidavit that he lives in London, blamed his dire financial straits on his long-running bankruptcy cases in Ireland and the United States. All of his income goes toward living expenses and legal fees, leaving him unable to contribute towards the support of his family, according to his affidavit.

“At the moment, I am unable to comply and pay for the order,” said Mr Dunne in the document.

He agreed in April to pay opposing lawyers $9,330 for failing to preserve and turn over certain emails related to his then-pending civil trial in US District Court in New Haven, Connecticut.

Shortly after the trial, in which a jury found he had fraudulently turned over millions of euros in assets to his wife Gayle Killilea to shield them from creditors and ordered her to surrender €18.1 million, Mr Dunne asked for a payment extension.

The plaintiff, the trustee in Mr Dunne’s American bankruptcy, granted Mr Dunne’s request in June but he has yet to pay the money. Last month, the trustee began proceedings to have the former property magnate held in contempt for non-payment.

In an accompanying memorandum, Mr Dunne’s attorney, Luke McGrath, reiterated his client’s statement of financial woe, arguing he had not “willfully” defied the order to pay. He criticised the trustee for beginning contempt proceedings after not contacting his client about the matter since July.

“[The trustee] is well aware that Dunne is currently bankrupt in two separate proceedings spanning across two continents,” wrote Mr McGrath. “In the midst of this situation, Dunne has no means to seek employment; no assets; and no ability to make any payment.”

In his memorandum, Mr McGrath asked US District Judge Jeffery Meyer to either deny the trustee’s motion to compel Mr Dunne to show why he should not be found in contempt or postpone payment until the case reaches final resolution.

“This motion is not well founded and was not prompted by a failure to find an amicable solution with Dunne to remedy his inability to pay,” wrote Mr McGrath.

Mr Dunne also said in his sworn statement that because of his financial problems, he has also stopped making the €7,000 monthly payments ordered by the Irish bankruptcy court two years ago. He does not say when he ceased the payments.

Ms Justice Caroline Costello imposed the payments in October 2018 to make more money available to creditors as she extended Mr Dunne’s case by another 12 years to 2028. She did so because of what she called Mr Dunne’s “wilful and deliberate” refusal to co-operate with the Irish bankruptcy trustee, at one point calling the property developer “deeply dishonest”.

In the same proceeding two years ago, Mr Dunne’s only income was reported to be $120,000 annually from Mountback USA and €12,000 a year from Amrakbo, a Dunne entity.

In his recent affidavit, Mr Dunne says his income from Amrakbo was reduced in January 2019 to €200 or $219 a month. He does not mention receiving any money from Mountback USA, which he and others have said is controlled by his wife.

At the time of his US bankruptcy filing in 2013, Mr Dunne listed his unsecured debts as exceeding $900 million.