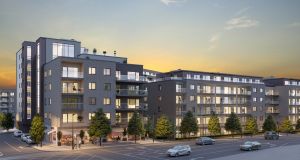 A computer-generated image of the proposed Hartfield Place apartment scheme.

The ongoing strength of Dublin’s private rented sector (PRS) in the face of the uncertainty being caused by the Covid-19 pandemic looks likely to be reflected once again with the forward sale of a new scheme comprising up to 475 apartments on Dublin’s northside.

Following the recent easing of Covid-19 restrictions and with funding for the development in place, Kieran Gannon’s Eastwise Group has retained CBRE and Dillon Marshall to find a purchaser for Hartfield Place in Drumcondra.

The sale of the scheme is expected to see strong interest from a wide range of overseas institutional investors, and offers in excess of €210 million.

While a sale at that price would equate to an average of €442,105 per apartment, it would be in line roughly with the €457,413 per unit the MKN Property Group secured from its recent €145 million sale of 317 units to German investor, DWS. The Prestige portfolio, as it is known, includes a mix of existing and new-build apartments and houses distributed across four schemes in the north Dublin suburbs of Swords, Raheny, Clontarf and Killester.

Hartfield Place will comprise up to 475 apartments upon completion. Distributed across seven blocks ranging in height from four to eight storeys, the scheme will include a mix of studios, and one-, two- and three-bedroom apartments. The development will have underground and surface parking capable of accommodating 352 cars and 522 bicycles.

In terms of its location, Hartfield Place is situated in a high-profile position on the Swords Road between the north city suburbs of Drumcondra and Santry. Dublin city centre is 4km to the south of the scheme while access to the M50 and wider motorway network is just 2km away.

Major employment hubs including East Point Business Park, the Dublin docklands, IFSC and St Stephen’s Green are all within a 30-minute commute by bus, car or bicycle.

The development will be well served by public transport thanks to its proximity to a quality bus corridor. The proposed delivery by 2027 of the Metrolink with a stop at nearby Collins Avenue meanwhile will further improve Hartfield Place’s connectivity with both Swords and Dublin city centre.

The joint selling agents, CBRE and Dillon Marshall expect Hartfield Place to appeal to a wide range of global investors.

They say: “Given the strength of the Irish multifamily market, the lack of comparable product in the sub-market and the pent-up appetite for investment over the past six months, we expect the sale of Hartfield Place to be a highly competitive process, with interest from both domestic and foreign capital sources.”

1 Google tells workers to return to country where they are employed
2 Sean Quinn stunned at rebranding of Quinn Industrial Holdings
3 Probate is changing: What does that mean for you?
4 Whistleblower warned EY of Wirecard fraud four years before collapse
5 Me & My Money: ‘Money can’t buy you happiness but it can make life a lot easier’
6 Subway bread too sweet for zero rating on VAT
7 Will tracker mortgage be at risk if Ulster Bank closes?
8 Cliff Taylor: Jobs crisis set to be lingering legacy of Covid-19
9 Three Ireland switches on 5G network around the country
10 Landlords accuse New Look fashion group of exaggerating insolvency
Real news has value SUBSCRIBE