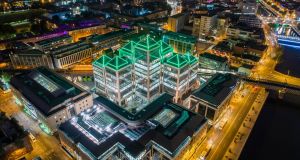 An aerial view of the George’s Quay office campus in Dublin city centre.

Henderson Park Capital is understood to be seeking in excess of €400 million from the sale of a further three prime Dublin offices it acquired as part of its €1.34 billion buyout of Green Reit in 2019.

Having already offered the “Capital Collection”, a portfolio of five office investments, to the market in January of this year, the UK-headquartered property company has instructed CBRE and Eastdil Secured to sell George’s Quay Plaza, George’s Quay House and George’s Court.

Located between the IFSC and the city’s south docklands, the three properties extend across a total area of 350,000sq ft and are home to a number of leading corporate occupiers including Fidelity International, Amundi Asset Management, Northern Trust, GAM Fund Management, and Huawei. The portfolio is delivering annual rental income of over €19 million currently and benefits from a WAULT (weighted average unexpired lease term) of approximately 11 years.

The combination of the portfolio’s central business location, “urban campus” design and blue-chip tenant line-up is expected by the joint selling agents, Kyle Rothwell of CBRE and Peter Geissel of Eastdil Secured, to attract significant interest from both domestic and international investors.

In the first instance, it secured €94 million from the sale of the Dublin headquarters of the EBS Building Society at 2 Burlington Road to German investor KGAL, while more recently it agreed the sale of 30-33 Molesworth Street to German real estate fund manager, KanAm Grund, for €60 million.

While Henderson Park continues to dispose of a number of its Dublin office properties, it is understood that it remains intent on deploying some €300 million of the proceeds from these sales on the development and optimisation of the other assets it acquired as part of its purchase of Green Reit. Horizon Logistics Park, close to Dublin Airport and the M50, and the Central Park office campus at Sandyford in south Dublin, are among the assets expected to benefit from investment.

Commenting on his company’s intentions for the Irish market following its most recent sale from the Capital Collection portfolio, Henderson Park founding partner and chief executive, Nick Weber, said: “Ireland remains a key investment market for Henderson Park and we now have a proven and experienced team and a permanent operating presence in Dublin.

“We expect to generate further liquidity from the remaining assets within the Capital Collection and to use proceeds to invest in our Irish development pipeline.”