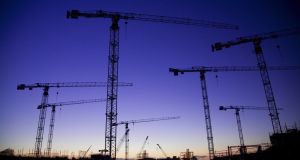 February’s count is 390 per cent greater than the 31 cranes recorded on February 1st, 2016, when this newspaper’s crane survey was first launched

This is the fourth month in a row when crane count has clocked up a record score. February’s count is also 390 per cent greater than the 31 cranes recorded on February 1st, 2016, when this newspaper’s crane survey was first launched.

The increases are being lead by a construction surge on the southside where February’s total of 75 is up seven on the previous month’s figure of 68.

Work on the new ESB headquarters on Fitzwilliam Street in Dublin 2 is ramping up. It will eventually include a whopping 45,770sq m (492,663sq ft) of space and is one of the largest office developments ever undertaken in the city.

Clearance work is also proceeding on the site of the former Screen cinema and College House buildings at the corner of Hawkins and Townsend streets. Dublin City Council recently gave the green light for a 10-storey office building complete with a restaurant and 500-seater entertainment venue on the site.

There were 46 cranes visible on the northside – up five on last month – but this is likely to grow as a number of large schemes are due to go on site soon in the north docklands.