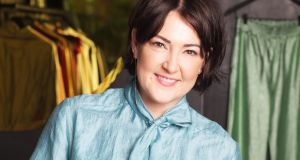 Grainne Wynne was a stay-at-home mother of two when her husband’s business folded and she had to return to work. Having previously spent years working in the hospitality sector she did a trial shift in a restaurant in an effort to try and pick up work. “As a stay-at-home parent your confidence levels are low anyway but I wasn’t called back and I was devastated.”

But she picked herself up, took a part-time job in a local boutique and tapped into her core talents.

I have my own individual style and always loved clothes, she explains. “But instead of college I was more of a practical learner. I moved out of home at the age of 18 because I wanted to be independent.” Working in restaurants to make a living she also took a summer course in fashion at the Grafton Academy.

She found she loved working at the boutique - “the merchandising of the shop and dealing with the customers” - so much so that the couple decided that Wynne should open a shop of her own. It was either going to be a store selling second-hand clothing, something she considered to be recession-proof, her plan being to start by selling her own wardrobe, or a high-end fashion boutique.

After much research she chose the latter having spotted the space in Rathmines, one of three units fronting onto Castlewood Avenue, that were added to the square footage of the Swan Centre when anchor tenant Fallon & Byrne set up residency in late 2018.

The frontage had been very tastefully reimagined by Odos Architects to a design by the food hall’s team and Wynne could see that Rathmines, once the transient part of Dublin 6 and a flatland heartland, was about to take off.

“I had a vision for the set-up but we had to get a bank loan and borrow from family to get started,” she explains.

The unit, which was in a shell and core state, took about four months to fit out.

Set-up costs amounted to about €200,000. She bought a gorgeous rosewood wall unit by Pol Cadovious and painted the walls an anthracite grey to let the clothes do most of the talking. The key piece through was an original Eames recliner that she bought from Michael Mortell’s shop on Dublin’s Francis Street. He counselled her to get to know her customer.

This resonated with her. “I wanted the clothing to reflect the love, care and timeless quality of the shop fittings and she wanted to bring the shop back to the old school style of fashion boutique where the experience, attention and level of service and stock, combine to grow customer base. She concentrated on the physical bricks and mortar shop rather than any online iteration for launch.

“It’s a place where you get to know a customer, their needs and demands, and I am now buying with these clients in mind.”

But it wasn’t all plain sailing to begin with. By the time Wynne had raised the necessary capital to let and furnish the shop, the unit had been let to someone else. However, she was persistent and her persistence paid off. When the new deal fell through on the premises, the agent came back to Wynne and she secured her shop.

Negotiating with letting agents turned out to be a walk in the park compared to dealing with sniffy fashion brands who can, she says, be “cliquey” and don’t like engaging with people they don’t know.

“I did hours and hours and hours of online research on the brands I liked and had already bought for myself when I had travelled abroad,” Wynne explains. She’s not a fan of fast fashion and for her own wardrobe she believes in buying one really good piece and wearing it constantly – pieces that would last for years, as she puts it. “I wanted labels that were not stocked by anyone else in Ireland and I wanted them to have an ethical ethos also.”

Wynne reached out to “hundreds of brands” and got numerous rejections. New York label Rachel Comey with its downtown aesthetic was one of the first fashion houses to say “Yes” to being stocked at Beautiful South and as with many designers she pitched to, designs were picked from line drawings rather than samples. “If you were lucky there would be a swatch of fabric attached. I didn’t see a single garment. You had to do all of the visualisation – scary stuff when you’re spending your own money,” says Wynne.

She discovered Amsterdam-based Les Coyotes de Paris, when it was just in its second season of womenswear and they agreed to her stocking their clothes. She also wanted MM6 Maison Margiela, an edgy label that was founded by Belgian Martin Margiela, one of the so-called Antwerp Six, a collective of designers that broke the fashion mould back in the 1980s. Its representative had turned her down, claiming not to know any of the other brands she was stocking. But when he was grounded in Dublin during Storm Ophelia he spent the time researching her brand choices and changed his mind.

She explains who her customer is: “My client is the 50-plus woman who likes to buy more classic pieces. I would be quite fashion forward in my own dress sense. I like avant garde designers and quality garments but the Irish woman is more conservative than the Parisian or London lady.”

Irish women will spend €500 on a piece they will wear once to a wedding. Beautiful South is about spending that money on a sweater that you will wear over and over again, rather than just once.

She opened last March and that first season 70 per cent of her stock was from Rachel Comey. While it sold out she now sells a wider range of brands that includes Frisur, a Berlin-based clothing company; Aalto, a Finnish brand and Mass Cob, a husband and wife designer label from La Coruna in Spain.

What she didn’t want was to focus on special occasion wear. “Irish women will spend €500 on a piece they will wear once to a wedding. Beautiful South is about spending that money on a sweater that you will wear over and over again, rather than just once.”

How does she make customers come back? It’s about listening and seeing what the customer wants rather than what I want, she says. And asking probing questions like ’what is your life like?’ and ‘will you wear this?’ to profile her purchases to suit her profession and weekend life.

Now into her third season before she signs on the dotted line for any new ranges she tries on every single garment to test it for fit and how the fabric feels and hangs. She inspects the seams to see how they’re finished and insists most of the stock is produced in Europe.

How does she grab the passing public’s attention? The minute she wears a garment it sells, she says, and calls her two part-time staff, the very cool-looking Christina, who can rock a pair of gold cropped trousers in a way most of us can only dream to, and Dominick, whose princely sense of style and male perspective offers a unique selling to customers. They are her secret weapons in helping to bring the racks alive.

There is no rhythm to the week, she says. “Everyday is busy and every day I still have new people popping in. Dublin is small and word is getting around.”