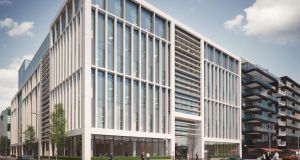 An artist’s impression of the Hanover Quay office.

Electronic-signature software company DocuSign has leased about 9,290sq m (100,000 sqft) of office space at 5 Hanover Quay, Dublin 2 in a move that will give it capacity to triple its current workforce.

DocuSign established a Dublin office in 2015 with plans to create 100 jobs in its first few years here. Similar to other technology giants who have established offices in the capital, it appears that those plans have accelerated beyond initial expectations, with the team growing by more than 50 per cent in the last year alone.

As part of its plans to expand its product offering in Dublin from its current core e-signature service to multiple offerings that help companies modernise their systems of agreement, the company is targeting aggressive future growth. Its new offices have the capacity to accommodate 800 employees, which would represent a 200 per cent expansion of its existing staff base.

The letting is good news for Targeted Investment Opportunities (TIO), a joint venture between Oaktree Capital Management, Bennett Construction and Nama, who developed the seven-storey office block. Upon completion of the building’s construction last year, vehicle-technology company Aptiv leased the three upper floors. Aptiv pays a rent of €624 per sq m (€58 per sq ft) for the floors it occupies, which extend to more than 5,575sq m (60,000sq ft).

DocuSign will occupy the ground to third floors and the letting will likely be one of the largest single office take-ups of the year in Dublin’s Silicon Docks area. CBRE agency acted for DocuSign, while joint agents Savills and Cushman & Wakefield acted for TIO.

Ronan Copeland, general manager of DocuSign Ireland stated that “our investment in our new Irish HQ reflects the potential in the local and regional market and our confidence in Ireland as the EMEA hub for the company”.

Mr Copeland added that the company considers Ireland “a global tech hub and [a] gateway to Europe”.

The majority of DocuSign’s annual revenue is derived from its US operations, however its international business represents about 20 per cent of its revenue and a significant portion of this is driven by the EMEA region. Irish-based companies who are already using the company’s e-signature solutions include AIB and Bank of Ireland.

DocuSign’s custom fit-out is underway and the company is due to move in before the year end, which will see it vacate its current offices at 1 Cumberland Place on Fenian Street, a Hibernia Reit-owned block that is also home to Twitter.

While currently unspecified, the level of rent to be paid by DocuSign may be similar to that of Airbnb, another tech giant who has also leased office space on Hanover Quay this year. In January, the short-term lettings company signed up to an annual lease of €2.37 million for office space at ground, first and second floor level at The Reflector building, extending to 3,897sq m (41,948sq ft) of space with 11 parking spaces. The average rent across the three floors equates to about €603 per sq m (€56 per sq ft).