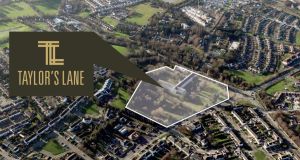 The 3.4 hectares, at Taylor’s Lane in Ballyboden, is being sold on behalf of the Order of St Augustine.

The 3.4 hectares (8.6 acres), at Taylor’s Lane in Ballyboden, is being sold on behalf of the Order of St Augustine.

A study by John Fleming Architects suggests the site could – subject to planning permission – accommodate a medium density residential scheme of 212 homes or a build-to-rent development of 436 units.

This would suggest permission to develop the site is likely to be secured under the strategic housing initiative which allows anyone who wants to build 100 or more homes to seek permission directly from the planning appeals board. The system is meant to speed large residential developments through the planning process, which developers argue is unnecessarily slowing construction.

The Ballyboden site has extensive road frontage and is close to the villages of Rathfarnham and Knocklyon, Nutgrove Shopping Centre and Dundrum Town Centre. Junction 12 of the M50 is a short drive away, as is Marlay Park and St Enda’s Park.

Agent Jack Devlin expects keen interest in the site “given the success of the nearby Scholarstown Wood development where new-build four-bed semis are making more than €600,000”.

There should be plenty of interest among developers for the site given its location in a mature suburb and looser restrictions on residential densities. However, while Irish banks are reluctant to overexpose themselves on property lending, there is no shortage of international funds looking at securing exposure to the Irish property market. Some of these are now buying sites and contracting local developers to build out planning permissions, especially on larger schemes.

A novitiate was developed on the site in the 1950s and it was subsequently leased to the State in 1980 which operated a day care centre there until December 2015. Adjoining the site to the south, the HSE has planning permission for a primary care centre.

This sale is part of a rationalisation of the order’s assets to better reflect its needs. Proceeds will be used to support the Augustinian ministry in Ireland, including provision for elderly members of the community and for missions overseas.

The Augustinians first arrived in Ireland in 1259 and established a friary here in 1282 at Abbeyside, Dungarvan. By 1358 the order had established a “house of formation” for its students and went on to develop a further 19 such houses by 1450. In the 1830s the Augustinians set up schools in Dungarvan and New Ross while also establishing missions in England, India and America. Missions to Africa followed in the 1920s. The order has care of three parishes in the Archdiocese of Dublin.