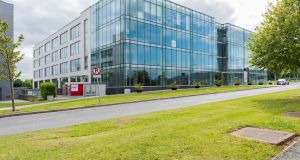 Accenture is expanding its footprint in Dublin after agreeing to lease a further 1,300sq m (14,000sq ft) of space in a modern office block in Cherrywood.

The firm is believed to have agreed a rent of about €269 per sq m (€25 per sq ft) on half of the ground floor at Building 11 on a new 10-year lease with a break option in year five. Accenture is also to rent 25 secure basement car-parking spaces at €1,500 each per annum as part of the deal which also included tenant incentives at the start of the lease.

Building 11, which is owned by DLR Properties (a subsidiary of Dún Laoghaire-Rathdown County Council), is a modern Grade A four-storey office block extending to 11,148sq m (120,000sq ft).

It is also home to APC – the fast-growing science and technology-based company – which operates its R&D division over 5,574sq m (60,000sq ft) on the second and third floors.

Last March Accenture opened its fourth base in Cherrywood when agreeing to lease 2,787sq m (30,000sq ft) at Building 11. Its latest expansion brings its quantum of space at Cherrywood to almost 4,180sq m (45,000sq ft).

Accenture has been in Ireland for almost 50 years and employs more than 2,500 people here. Its main business is located at 1 Grand Canal Square in the docklands. It also has a research and incubation unit at 7 Hanover Quay, and a corporate services hub at Grand Canal Plaza.

Development work at Cherrywood is getting underway in earnest. The new town will house about 25,000 people in 9,000 apartments and houses, and provide office space for 10,000 workers on 400 acres of land. The €1 billion mixed-use development will have 1,269 build-to-rent apartments, 54,348sq m (585,000sq ft) of retail and office space, as well as high-amenity leisure space.

Last year, Hines, in partnership with Dún Laoghaire-Rathdown County Council, completed the construction of the first phase of the project, comprising three new parks, sports facilities and 5.4km of roadways.