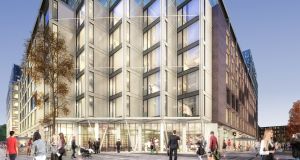 Leading Dublin property developer Chartered Land is to consider either a forward funding arrangement or a leasing deal for a planned 211-bedroom hotel in Ballsbridge, Dublin 4.

The seven-storey hotel over a double-basement car park will form the centrepiece of a substantial mixed development of apartments and penthouses, shops and restaurants, which will replace the Ballsbridge Hotel on Pembroke Road.

The first phase of a high-end development of apartments and penthouses on the site of the former Berkeley Court Hotel is already under way and is being financed by the Joe O’Reilly-run Chartered Land and the Abu Dhabi Investment Authority.

The cost of developing the prestigious new hotel has not yet been disclosed, but with four- and five-star hotels in Dublin trading at between €400,000 and €500,000 per key, the end value could finish up in the region of €85-€100 million.

John Ryan of CBRE, which is advising on the funding, says the new hotel is to be offered to the market “with considerable flexibility”. Expressions of interest were being sought from established hoteliers and investors through various options such as a “forward commit, forward fund or subject to a lease”.

The flexibility offered would appeal to a host of hoteliers, operators and investors, he said.

In the meantime, Chartered Land appears to have hit the jackpot with a top-of-the market residential quarter on the site of the former Berkeley Court Hotel, now known as Lansdowne Place. The plan here is to build 217 apartments and 24 penthouses in five blocks.

Nine of the penthouses have already been sold off plans. These included one with 353sq m (3,800sq ft) of internal space and a roof garden, sold to an undisclosed purchaser for €6.5 million. Before that, Green Property boss Stephen Vernon paid €5 million for a four-bed penthouse plus study extending to 3,672sq ft and 2,820sq ft of terraces, bringing the total floor area to 6,492sq ft.

The new hotel will replace the Ballsbridge Hotel on the Pembroke Road end of the site. It is currently being run by Dalata on a short-term lease that runs out in 2019.

The new hotel will front on to a pedestrianised street to be shared by a separate mixed development, to be known as One Ballsbridge. The new street will link up Shelbourne Road with Pembroke Road, where some of the planned new restaurants will be based, including Avoca and Dylan McGrath.

The main office space is to be rented by Avolon, one of the world’s largest aircraft leasing companies.

Chartered Land has also secured planning permission for close to 300 apartments and 5,000sq m of retail facilities in the area around the new hotel. Several wealthy business people residing in Dublin 4 and adjoining areas are reported to be planning to offload their oversized homes with the intention of relocating to the Chartered Land apartments and penthouses.

Chartered Land is one of Ireland’s most successful development companies. Its past projects include Dundrum Town Centre, Grand Canal Square and the Gaiety Centre on South King Street.