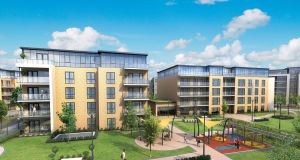 The Fairways apartment scheme in Dún Laoghaire will be based on four five- and six-storey buildings over a basement car park.

A large-scale apartment development under construction in Dún Laoghaire, Co Dublin, is to be offered for sale as a single investment. Agent Hooke & MacDonald is guiding €95 million for 214 apartments being built by the Cosgrave Group at the Fairways scheme, Cualanor, Dún Laoghaire, and due to be completed by the end of next year.

News of the latest investment opportunity comes only days after Cosgraves completed formal contracts for the sale of 216 apartments at Bridgefield, Santry Demesne, Dublin 9. The portfolio was purchased by a joint venture company, Canadian-based QuadReal Property Group and the European-based Round Hill Capital, for close to €84 million – almost €4 million above the guide price. The Bridgefield apartments are expected to show a return of 5.4 to 5.7 per cent – reflecting average rents of €1,600 for one-bedroom apartments, €1,800 for two-bedroom units and €2,050 for three-bedroom homes.

After completing the formal contracts, John Vaudin, managing director of Round Hill Capital, said the real estate investment company was ready to bring its “extensive international experience and over €1 billion of committed capital” to deliver housing to Ireland in the long term.

The latest development at Fairways in Dún Laoghaire is expected to bring in an annual rent roll of €5.15 to €5.41million, reflecting a yield of 5.4 to 5.7 per cent.

The project will be the fourth substantial Cosgrave scheme to be offered for sale as a long-term investment. In 2016, the company sold 197 apartments at Neptune, Honeypark, also in Dún Laoghaire to SW3Capital-Tristan Capital Partners for €72.5 million. The following year, the company sold 319 apartments at the Leone and Charlotte buildings in the same park to the German fund Patrizia for €132 million.

The selling agents say the Fairways apartments have been designed to be spacious, stylish and finished with high ceilings and large windows

In spite of the success of the large scale sales, Cosgraves has maintained a twin approach over the past six years, selling more than 1,500 apartments and houses to individual buyers as well as the wealthy investment groups.

The latest Fairways development of 214 apartments will be based on four five and six-storey blocks over a basement car park. Three of the blocks will be located at Fairway Court and the other at Fairway Hall on the seaward side of the former Dún Laoghaire Golf Club lands.

The selling agents say the Fairways apartments have been designed to be spacious, stylish and finished with high ceilings and large windows. The layouts include large, open-plan kitchen-livingrooms which form the centrepiece of the apartments, where balconies provide an extension of living space. Bedrooms will be mainly double rooms featuring good quality wardrobes, ensuites and bathrooms. Kitchens will have a separate utility-store room.

The Fairways site is located directly off the Upper Glenageary Road, adjacent to Cualanor parklands with pedestrian access to Tivoli Road via Eglinton Park. The development will be located in landscaped grounds that include woodland areas, a six-acre park, a piazza, jogging paths and a children’s playground. Future residents can look forward to more enhanced facilities including a gym, children’s playgrounds, garden seating, nature walks and a tree lined boulevard.