New tenants for Citywest as current ones expand

DPS and CDK Global will trade alongside tenants including Adobe, Unilever and UPS 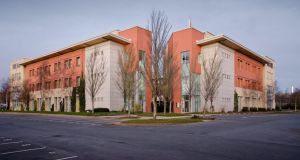 Citywest Business Campus in west Dublin continues to attract some of the most notable multinational companies setting up business operations in Ireland.

In addition to the two new tenants, Davy Hickey Properties has agreed to rent the only remaining vacant offices to a well-known international finance company, to be named in due course. And Adobe Systems has rented a further 789sq m (8,500sq ft), bringing its overall capacity to 3,901sq m (42,000sq ft).

The next assets to be unveiled will be the first suburban Platinum LEED office block and a development of three- and four-bedroom homes inspired by redbrick streetscapes found in some of Dublin’s most popular suburban villages.

Citywest has an overall workforce of more than 7,000 who can avail of a range of shops on site as well as restaurants, cafes, delis, gyms and childcare facilities. The campus is highly accessible with a range of bus routes as well as the Luas Red Line from the city centre. A newly launched private bus service also connects Citywest with Dundrum and UCD.