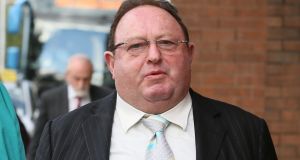 Jim Kennedy had made an FOI request to Dún Laoghaire Rathdown County Council for copies of all records it held relating to his company. Photograph: Courts Collins

Businessman Jim Kennedy and his company Jackson Way Properties (JWP) have lost a High Court challenge over a refusal to provide information about land in Carrickmines, south Dublin, which has been the subject of years of litigation.

Ms Justice Niamh Hyland dismissed an appeal by JWP and Mr Kennedy against a January 2019 decision of the Information Commissioner backing Dún Laoghaire Rathdown County Council’s refusal to provide information held by it.

In February 2017, Mr Kennedy and JWP had made a Freedom of Information (FOI) request to the council for copies of all records it held relating to JWP, its property, any burdens affecting title and any claims for compensation alleged to affect its land.

They also sought documents on JWP’s own claim for compensation against the council relating to the Carrickmines land which was compulsorily acquired for the M50.

JWP was awarded €12.8 million compensation for the loss of the land but later had to bring proceedings against the council seeking enforcement of the award. That was complicated when landowners adjoining the JWP property claimed they were entitled to part of the €12.8 million because they enjoyed the benefit of an historic agreement on both properties restricting building.

JWP challenged that claim and won its case in which a judge found no such restriction existed.

A separate case by the Criminal Assets Bureau seeking payment from Mr Kennedy of monies which CAB claimed came from the alleged corrupt enrichment of Jackson Way following rezoning of the Carrickmines land was eventually withdrawn in 2014.

The council had refused the FOI request on the basis the examination of both hard copy and electronic records, which had been identified in a scoping exercise, would cause substantial and unreasonable disruption and interference with its normal work.

It would take 262 hours to examine them, including some 9,000 emails, it said. The commissioner disagreed and they appealed the decision to the High Court.

Mr Kennedy and JWP argued, among other things, the correct legal test was not applied in the commissioner’s decision and it was wrong in law. There had also been no assessment of the reasonableness of the alleged interference with council work, they claimed.

The commissioner opposed the appeal and the council was a notice party.

On Friday, Ms Justice Hyland dismissed the appeal after finding there was “ample evidential basis” for the commissioner’s decision.

It was apparent from the decision refusing the information that consideration was given to factors including the time involved, the number of records, staff resources and how the council’s functional areas would be affected, she said.

The council had put before the commissioner sufficient material to justify the decision, she said.