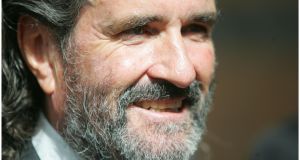 Johnny Ronan has since made a major comeback in the docklands area and is developing, with Colony Capital, Salesforce Tower Dublin at Spencer Dock. Photograph: Bryan O’Brien

The latest receivers’ extract for the former Johnny Ronan company, lodged with the Companies Office, shows the receivership costs are comprised of professional, management and receiver fees.

The breakdown for the latest six-month period of the process shows €168,590 was paid in property management fees, €119,132 in professional fees and€19,604 in receiver fees.This totalled €306,000 for the period between July last to January of this year.

An unnamed secured creditor received €215,000 during the period.

Treasury Holdings unsuccessfully challenged the receivership in the High Court. The firm had cash reserves of €4.87 million on the appointment of receivers.

The figures show that after seven years in receivership, there are receipts totalling €98.6 million. Payments made arising from the receivership total €97.7million.

Johnny Ronan has in more recent times made a major comeback in the docklands area and is developing, in partnership with Colony Capital, Salesforce Tower Dublin, which is comprised of four connected buildings at Spencer Dock.