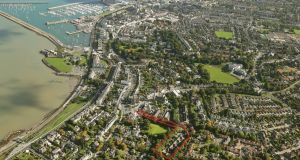 A contentious planning battle near chic Monkstown village in south Co Dublin appears to have ended after An Bord Pleanála gave the green light for 56 apartments in two four-storey blocks on the site of a former Cheshire home off Monkstown Road.

The development, which generated 14 third-party observations, will now consist of two four-storey apartment blocks rising to a height of 12.95 metres.

The Richmond Cheshire Home closed in 2016 but had reopened since as a hub for homeless families.

The home housed people with disabilities for 36 years and the decision to close the facility generated controversy locally.

However, the Cheshire Foundation said it was following HSE policy of moving service users with disabilities from a central location into the community.

Planning permission allows for the demolition of the former nursing home and its replacement with 21 one-bed, 21 two-bed and 14 three-bed apartments, along with a basement level with 76 car-parking spaces, five motorbike spaces and 41 bicycle spaces.

There will also be five visitor car-parking spaces and 26 bicycle spaces at surface level.

Concerns were raised by the Department of Culture, Heritage and Gaeltacht in relation to a heronry in a very large Monterey Cypress tree at the entrance to the site.

But the department is now satisfied with measures proposed to protect the tree and its rare heronry during construction works.

The current single-storey complex has 18 bedrooms, extends to 1,581sq m (17,022sq ft) and also has five studio apartments to the rear.

The home and extensive grounds had been sold in 2015 to PegasusLife, a British company specialising in retirement homes, for an undisclosed figure.

The 2.34 acre site then came on the market in January 2016 with Savills guiding €4.95 million and it was snapped up in April of the same year by a local developer for more than €5 million.

This part of south Dublin is among the most sought-after residential areas in the capital. New paving was recently installed in Monkstown village, which has many cafes and restaurants, and Monkstown Road has also just been upgraded.

The area is within a five-minute walk of the Dart at Monkstown and Salthill station, has an Aircoach service to Dublin Airport and is serviced by numerous Dublin Bus routes. Dún Laoghaire and Blackrock are also within walking distance, as is the sea at Salthill.