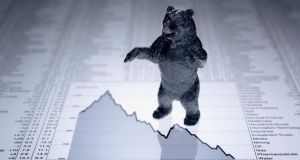 Were bears ‘right’ when warning of imminent collapse every year of the last decade? Photograph: Getty Images

That’s the message emanating from many market bears in recent weeks. Mocked over the last decade for sitting out the longest bull market in history, some of the permabears haven’t been slow to say “I told you so” following the fastest bear market in history.

“It’s time for the mainstream economics world to admit something: you were wrong and those who were warning about bubbles were right,” says economic forecaster and columnist Jesse Colombo. “Zero Hedge, Peter Schiff, David Rosenberg, Albert Edwards, myself (and others) were right for warning about these risks. Even if you were warning that we were in a bubble in 2011, 2012...2017, 2018, etc, you were right.” Risk was building up and the fact that stocks gained during those years doesn’t matter, says Colombo. Those gains are disappearing fast and the “bullish fools never even got a chance to sell!”

Although this kind of adversarial, hysterical tone is thankfully absent from the notes produced by professional strategists, a milder version of “I told you so” isn’t hard to detect.

The inverted US yield curve and a cyclically-adjusted price-earnings (Cape) ratio above 30 “were key warning signs of a looming crash of global equity markets”, says Commerzbank. “Similar to 2000 and 2007, the inverted US yield curve has been followed by brutal, painful stress in the financial system.” Morgan Stanley strategist Michael Wilson also refers to last year’s yield curve inversion, which is viewed by many as a reliable recession indicator. “The yield curve’s track record remains perfect,” says Wilson. “It was never ‘different this time’.”

There’s an obvious problem with this narrative: stock markets have collapsed because the world has suddenly been struck by the worst pandemic in a century. The strongest economy imaginable would not have been able to survive the global shutdown necessitated by the emergence of Covid-19.

As for valuations, the US Cape ratio has been signalling over-valuation throughout the last decade, but indices kept climbing. Indeed, US Cape ratios have been high for almost all of the last 25 years. Non-US markets have also been pummelled lately, even though most trade on undemanding Cape ratios. This was an event-driven crash, not one triggered by underlying economic conditions or a sudden bout of valuation angst.

“Not a single one of [the permabears’] theories is the reason why we are in the current sell-off,” says Ritholtz Wealth Management’s Nick Maggiulli. Stocks may well keep falling but the bears “were still wrong on the ‘why’ and that’s the whole point”, he says. “They just got lucky.”

Michael Wilson has been one of the more bearish strategists on Wall Street in recent years although he’s certainly not a permabear; he says stocks are worth buying following the recent heavy falls.

Labels aside, Wilson’s analysis of the market downturn nevertheless brings to mind Maggiulli’s complaint that the bears are wrongly congratulating themselves right now. Aside from his aforementioned comment about the yield curve’s track record remaining “perfect”, the Morgan Stanley strategist says the recent crash represents a “finishing move to a bear market cyclical correction that started two years ago”.

In 2018, Wilson argued that stocks were in a “rolling bear market” characterised by weakness that gradually rolled through different sectors over time. That seemed prescient when stocks declined sharply in late 2018 but less so when indices ripped higher in 2019. “The market is telling me I’m wrong,” he admitted last April, and Wilson began to adopt a less bearish position, so much so that in February, he said coronavirus “should not derail the recovery”, with the market correction likely to be “contained to 5 per cent in the S&P 500”.

Now, he seems to be saying he wasn’t wrong after all, that stocks really have been in a rolling bear market over the last two years. Does that make sense, given that the S&P 500 gained over 30 per cent last year, in the process hitting all-time high after all-time high?

Still, while Michael Wilson may be partly guilty of motivated reasoning, he has at least shown a willingness to change his mind. In contrast, gold bug and Euro Pacific Asset Management chief executive Peter Schiff, who rose to prominence during the global financial crisis, has been warning of financial Armageddon for the best part of two decades now.

Schiff loves to remind commentators how he predicted the 2008 financial crisis, although the reality is he envisaged not only a banking and housing crash but also hyperinflation, a US dollar collapse and gold at $5,000 (€4,600). A 2016 article of mine that noted these missteps prompted Schiff to complain that I was “misstating the few things I have supposedly got wrong”.

Asked about this prediction in 2015, Schiff told CNBC that a “few years” could mean three, “but it could also be four or maybe five”. CNBC’s criticisms would look “foolish” as “my forecasts of the coming crisis will likely end up being just as accurate as my forecasts of the 2008 financial crisis”. Today, gold remains below $1,600 but Schiff’s faith is undimmed, saying last month that “my 5K gold call will soon be a reality”.

And if that doesn’t happen, he can always keep arguing that he’s right and markets are wrong. “People are as dumb as they’ve always been,” he complained in 2013. He was “too optimistic on the world’s ability to figure out the truth”, he said in 2015.

“Most people are in denial, but those who aren’t are preparing,” he said in 2019. “And even if you prepare too early, that’s fine because it’s much better than preparing too late, which means you’re not prepared at all.” Gold “is falling because investors are clueless as to what is coming”, he said last month.

Most market bears, in fairness, aren’t nearly as uncompromising as Schiff. Even Albert Edwards, Societe Generale’s famously bearish strategist who has been warning of an “ice age” for equities since the mid-1990s, admits the idea that the bears predicted recent events is “ridiculous”, adding that the collapse “was clearly caused by a wholly exogenous event”. Rather, Edwards argues that central bank actions over the last decade “have made the current already bad situation much worse than it otherwise would have been.”

One can certainly argue this point. Similarly, one can argue that US indices were vulnerable due to their steep valuations prior to the coronavirus outbreak. However, does this really mean that bears were “right” when warning of imminent collapse every year of the last decade?

No, but as celebrated financial writer Morgan Housel once said, “people are wrong so often that being right for the wrong reason feels good enough to call it a win”.

1 Should my mam wait for house prices to drop before buying?
2 Covid-19 mortgage breaks: What’s the catch?
3 Cheers: Conor McGregor's whiskey races up the sales chart
4 Brother is dragging his heels as executor of uncle’s will - is there anything I can do?
5 Almost 70% of home buyers to purchase within next year
6 Dublin drops out of top 50 in ranking of best cities for start-ups
7 Revenue faces US drug company Perrigo over disputed €1.64bn tax bill
8 Health insurers take a hit, Perrigo vs Revenue and mortgage breaks examined
9 Covid-19 takeover of private hospitals to cost insurers €180m
10 Coronavirus: Workplaces review office design with view to return
Real news has value SUBSCRIBE