Nama to transfer €1bn to Government amid 10th year of profit 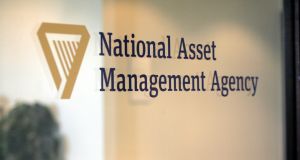 Nama confirmed on Monday that it plans to hand over an additional €1 billion of surplus cash to the Government this year, as it expects to report a 10th consecutive annual profit for 2020.

The so-called bad bank transferred an initial €2 billion to the Exchequer last June and continues to forecast that it will deliver a lifetime surplus of €4 billion for the State.

Nama generated €900 million in cash last year, which exceeded its internal targets and brought total cash generated since its inception in 2009 to €46 billion, the agency said in its latest year-end review.

Last year also saw Nama complete the repayment of the final instalment on the €32 billion owed to five lenders for the risky commercial property loans they transferred to the agency between 2010 and 2011. The €32 billion represented a 57 per cent discount on the original €74 billion value of the loans.

Nama said it continued to work with debtors and receivers to deliver homes on sites backed by is loans, in spite of the “unavoidable delays” caused by Covid-19 to construction projects.

The number of housing units delivered directly by Nama’s residential delivery programme since 2014 totalled 12,450 by end 2020, it said. This indicates that 750 homes were delivered last year, when comparing figures against those provided in the end-2019 statement.

A further 6,550 units have been delivered on former Nama-secured sites which benefitted from Nama asset management or funding. That is 1,450 more units than outlined in the previous annual review.

Nama said on December 22nd that developer Johnny Ronan and US investment firm Oaktree had signed up to buy an 80 per cent stake in the former Irish Glass Bottle site and an adjoining plot in Dublin.

Sources said the winning bid for the controlling interest came to a higher-than-expected €200 million, which put an overall value on the 37-acre site, held through a company called Pembroke Ventures, at €250 million.

The largest vacant plot in the capital, which is part of the Dublin Docklands Strategic Development Zone (SDZ), is expected to deliver up to 3,800 homes, 25 per cent of which are earmarked for social and affordable housing, as well as 1 million sq ft (92,903 sq m) of commercial space.

“2020 brought many unexpected challenges but we continue to work towards achieving our strategic objectives, particularly regarding the funding and facilitating of residential development and the completion of our work in the Dublin Docklands SDZ,” said Nama chief executive Brendan McDonagh.

Nama had its planned lifespan extended by the last government in 2019, from 2021 to 2025, in order to allow the agency work through its remaining loans and legal cases.