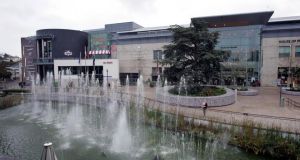 Dundrum Town Centre: expected to come on the market in the early part of the year and will generate considerable interest at home and abroad. Photograph: Matt Kavanagh

Six years after the property meltdown, the painful hangover has been replaced by a buying frenzy, much of it at surprisingly high values.

The turnaround and the sales flurry seem set to roll on in the new year when a range of notable shopping centres, retail parks, office investments and even the income stream from the Convention Centre in Dublin are brought to the market by either Nama, the banks or teams of receivers and liquidators.

By year-end the overall turnover is set to exceed €4 billion for the first time ever. That figure will move to €5 billion once loan sales are also taken into account.

One of the highlights of recent months has been the high proportion of property sales under €5 million which have been prompted by an exemption on capital gains tax which runs out at the end of the year.

The intense competition for the main distressed assets between overseas funds as well as IPUT, Irish Life and the three domestic Reits has pushed selling prices way above guidelines and brought yields for prime rack rented offices down from 7.5 per cent to around 4.75 per cent.

In one instance Irish Life even settled for a return of 3.5 per cent when it paid €120 million for an under-rented grade A office block at Grand Canal Square leased to solicitors William Fry and business solutions experts Capit.

Retail yields for prime properties have also been sliding, moving from 6.5 per cent 18 months ago to as low as 4 per cent – again involving Irish Life when it paid over €30 million for five top-class stores on Henry Street.

Another test of values on Dublin’s principal high streets will come shortly when Nama offers for sale two newly-amalgamated, if a little disappointing, buildings near the top of Grafton Street which have just been let to Life Style Sports.

The property debt market continues to be dominated by US investors like Marthon, Blackstone and Cerberus.

Domestic investors have been the most active asset investors, accounting for about 69 per cent over the first three-quarters of the year.

Given that the Irish Reits are largely funded by American capital, the impact of US money is still very strong.

There is still some concern that the private equity money driving property values will dry up as investors in search of high returns refocus on to more distressed markets. However, the emergency of German funds provides significant comfort.

And the recent investment of €140 million by Allianz, one of the world’s biggest financial services institutions, into IPUT shows the strength of German interest in the Irish market.

The centre is by far the largest and most valuable in the country with almost 140,000sq m (1.5m sq ft) of retail space including 120 shops, 38 restaurants and a 12-screen cinema with a reported rental income of €55 million.

The sale of this trophy asset could well attract interest from Middle or Far Eastern investors, including sovereign wealth funds, but given the scale of the development it seems more likely that it will be bought by investors with an intimate knowledge of the Irish market. With the price tag likely to be pitched over €1 billion, investment expert Adrian Trueick of Knight Frank reckons that the investment could well end up being parcelled out to a consortium of investors including a specialist retail manager and a number of capital partners.

Because of the huge international interest in Dundrum it would seem foolhardy for Nama to even consider selling off the country’s most valuable property as part of a loan book along with possibly a few of Chartered Land’s other investments such as its 50 per cent stake in the Ilac centre or its majority holding in The Pavilions shopping centre in Swords.

The indications are that the big players will pay over the odds for such a unique asset as Dundrum and do not want to be distracted by shareholdings in peripheral properties.

Nama critics point to the errors made in disposing of Stillorgan shopping centre as part of a loan portfolio – admittedly at a time when values were on the floor – and remind the State property agency that in a fast moving market, and with exchequer finances now well on the way to recovery, the final selling price is more important to the taxpayer than the speed with which property investments are sold.

This time around Athlone will be offered for sale in a portfolio along with four other provincial shopping centres.

Nama is also preparing another loan book which will include three hotels owned by Galway developer Gerry Barrett, The Merwick and G Hotels in Galway and the D Hotel in Drogheda, as well as Scotch Hall shopping centre in Drogheda and Wellpark retail park in Galway. A commercial site in Waterford may also be included. The overall valuation is likely to be €100 million

In Cork, the expectation is that the Wilton shopping centre, with a retail area of over 9,290sq m (100,000sq ft), will also probably go for sale in the new year. The profit-making centre is anchored by Tesco and Penneys.

Back in Dublin, Nama has considered the sale of The Square shopping centre in Tallaght, but after acquiring a 16-acre site and securing planning permission for an additional 18,580sq m (200,000sq ft) of retail space and a 800-space multi-storey car park, the strategy may be to bring a joint venture partner on board before embarking on an expensive extension. At the end of the day The Square is still likely to go on the market.

The list of planned disposals in the new year is also expected to include a large office portfolio controlled by Paddy Kelly and John Flynn which will include 3G’s offices at Sir John Rogerson’s Quay (9,290sq m/100,000sq ft); a 50 per cent share in Burlington Plaza, a 22,296sq m office complex occupied by Bank of Ireland, BSkyB and Amazon on Burlington Road; Whittaker Court rented by System Dynamics and Spencer Stuart at Sir John Rogerson’s Quay (4,358sq m/46,908 sq ft); and Byrne Wallace’s offices on Harcourt Street (4,645sq m/50,000sq ft).

Lone Star is understood to have attempted to buy the loan securing the assets for these and other office investments held by the group, but the likelihood is that Nama will opt for a public selling campaign.

A separate suburban office portfolio is also being prepared for sale early in 2015 and will include large blocks in Sandyford Business Park, Deansgrange and Carrickmines which were financed by Anglo Irish Bank and other domestic banks.

Another high-profile investment opportunity which will attract international interest will be the sale of the income stream related to the Convention Centre in Dublin.

The liquidator of Treasury Holdings, which built the centre, has appointed an investment bank to sell the income stream which is reported to be worth between €80 million and €150 million.

The various banks and Nama are also likely to move next year to recover some of the funds expended on development land in the greater Dublin area.

The acreage is likely to include Adamstown and Ashtown in west Dublin and Millennium Park in Naas, but the indications are that there is little enthusiasm for mounting a selling campaign to offload hundreds of residential and commercial sites throughout the provinces because values are still a fraction of where they stood before the crash.

The fact that 90 per cent of the overall investment volumes this year were in the Dublin area shows that the recovery has been largely centred on the capital.

1 Chris Johns: Ireland risks populist culture war between young and old
2 Boeing identifies new software flaw in grounded 737 Max
3 Seán FitzPatrick’s new Greystones home plan runs into privacy issues
4 Should I sell the old family home to allow children buy apartments?
5 Help, I’ve no PRSI stamps – can I still get a pension?
6 ‘Life in Vilnius reminds me of Ireland in the 1990s’
7 The Irish economy is thriving but if you’re not feeling it – here’s why
8 Dublin housebuilder records €11m gain after striking deal with bankers
9 GoMo is being investigated by advertising authority
10 Does Budget 2020 price UK car imports out of the market?
Real news has value SUBSCRIBE