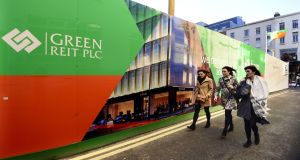 The One Molesworth Street site – the building has since been partly let to British Bank Barclays and Canadian investment bank TD Securities. Photograph: Cyril Byrne

Property group Green Reit, whose stock market value has risen by 11 per cent to €1.19 billion since it put itself up for sale five weeks ago, has set a deadline of June 12th for indicative bids for the company or its assets, according to sources.

Californian real-estate company Kennedy Wilson is understood to be part of a consortium that is being assembled to mount a bid for Green Reit, while Irish Life is also said to be carrying out detailed work with a view to putting forward an offer.

The process has attracted a lot of overseas interest with European pension funds, Asian and North American money also in the early mix. A shortlist of suitors will be drawn up after initial proposals have been assessed.

Spokesmen for Green Reit and Irish Life declined to comment, while a spokesman for Kennedy Wilson did not come back with a response to a query from The Irish Times.

Green Reit, co-founded by Stephen Vernon and Pat Gunne, became the first Irish real-estate investment trust to float on the Irish stock market when it raised €300 million in an initial public offering (IPO) in July 2013. Legislation paving the way for such trusts in the Republic had only been enacted months earlier.

The company shocked the market when it announced on April 15th that had decided to sell itself or its portfolio, as its share price “has been subject to a material and persistent structural discount to its net asset value per share over three years now”.

Kennedy Wilson was one of the first overseas property firms to enter the Irish market following the crash. Its Dublin holdings include the five-star Shelbourne Hotel, Portmarnock Hotel and Golf Links, Stillorgan Shopping Centre, Clancy Quay apartments complex in Dublin 8 and landmark Capital Dock mixed-use project in the south docklands.

Irish Life investment management unit has more than €3 billion of Irish property assets under management, having spent €1.5 billion on deals over the past six years.

The sale comes as Taoiseach Leo Varadkar signalled in the Dáil this week that the Government is planning to review the tax treatment of property investment funds.

“Tax incentives are brought in at a time to stimulate particular activity but are then removed at a later period when they are no longer necessary,” he said. The review most likely be done in the context of preparing tax policy options for the Government ahead of the budget in October.